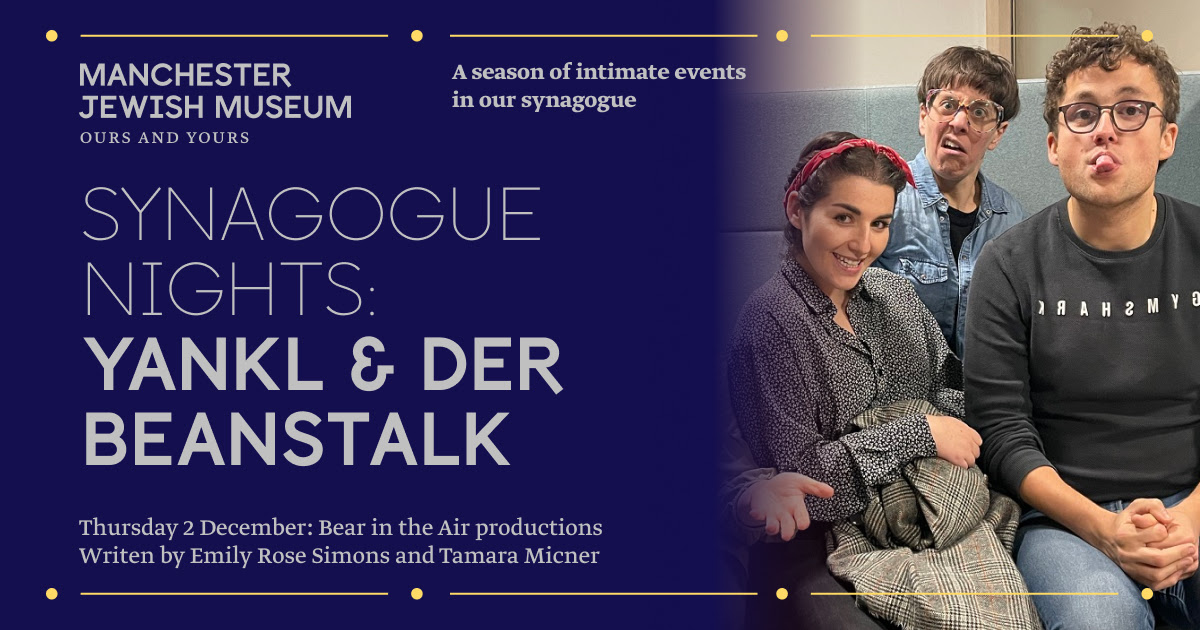 On Thursday, December 2nd, the Manchester Jewish Museum will be whisked away to the magical lands of Brick Lane and Hampstead with a crude and infectiously funny version of the classic Yiddish pantomime “Yankl & The Beanstalk”.

The versatile artist collective Sam Ranger, Tamara Micner and Emily Rose, accompanied by a small troop of colorful actors, will give the Yiddish pantomime tradition a grown-up touch with its seditious, rough and irreverent pantomime in progress.

It tells the story of Yankl, an unfortunate pickle seller who lives with his mother near Brick Lane. One day Yankl trades a few cucumbers for beans, climbs a beanstalk and ends up in … Hampstead !?
You can have Yiddish translations of your favorite songs (Bohemian Rhapsody?)!

Yankl & Der Beanstalk is part of the opening season of the museum’s Synagogue Nights with intimate events in their beautiful, Grade II listed Spanish and Portuguese synagogues. With Israeli world jazz music artist Noga Ritter through early 2022, this season brings the historic building to life with events exploring various Jewish identities and stories.

Yiddish pantomimes (also called Haimisher pantomimes) became popular in the Jewish communities of Manchester after World War II. They took traditional English pantomimes like Aladdin, Cinderella and Jack in the Beanstalk and infused them with Jewish characters and Yiddish language, songs and humor to give them a Jewish touch. In Manchester, many of the Yiddish pantomimes were written by the local Jewish playwright Julius Emanuel.

Photos and programs of Julius Emanuel’s pantomimes are kept in the collection of the Manchester Jewish Museum, including an oral story with the author himself: “When you think about it, translating a typical English pantomime into a Jewish language is quite an amusing idea … It became a tradition and I made one every year. The first was “Cinderelly” then there was “Alleddin and his Magic lamp”, “Babes in de vood”, “Mick Wittingstein”, “Humpty Dumpling” and they were all in the Jewish language you see … It was quite amusing if you were Yiddish and English. “

Yankl & The Beanstalk will be performed on Thursday December 2nd at the Manchester Jewish Museum in the listed Synagogue Frade II *. You can book via the website below or by phone on 0161 834 9879: www.manchesterjewishmuseum.com/event/yankl-der-beanstalk/

The Manchester Jewish Museum is open seven days a week from 10 a.m. to 5 p.m. and on event evenings from 6 p.m.