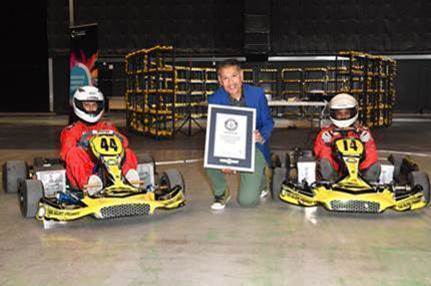 A new Guinness World Records® title for the highest voltage in a fruit battery has been established by the Royal Society of Chemistry (RSC), battery expert Professor Saiful Islam and science presenter Fran Scott.

The RSC team generated an astonishing 2,307.8 volts with 2,923 lemons, breaking the previous world record of 1,521 volts, and then started a battery-powered Blair Project go-kart race in Manchester.

The electrifying performance was designed by the Royal Society of Chemistry to highlight the importance of energy storage and the need for new innovations for a carbon-free world in the context of the COP26 climate summit.

In addition to the record-breaking title, the RSC has conducted research to understand young people’s awareness and attitudes about sustainability and climate change to provide critical insights into teaching sustainability-related topics in schools, published in its new report Green Shoots: A Sustainable Chemistry Curriculum for a sustainable planet

The results show that young people are strongly committed to issues of climate change and sustainability. More than three quarters said they believe climate change is an urgent priority and that responsibility for it needs to be shared (both 78%). Three quarters (75%) of respondents said they were concerned about the future of the planet, while 74% were actively looking for ways to combat climate change.

Together with existing teacher research, the results should encourage the government to put climate change at the heart of education and address the significant deficiencies in secondary education by leveraging chemistry’s central role in tackling climate change issues.

Dr. Helen Pain, CEO of the Royal Society of Chemistry, said: “Public concern about climate change is at record levels. The success of our Guinness World Records attempt to get the highest voltage out of a fruit battery was a lot of fun, but the sustainability message that underpins it is incredibly serious and important. “

Professor Saiful Islam, a Trustee of the Royal Society of Chemistry, Professor of Materials Chemistry at the University of Bath and a member of the Expert Panel at the Faraday Institution, said, “It was very exciting to be able to reclaim our Guinness World Records title by squeezing the highest tension out of one Fruit battery. It’s an amazing feat, but it’s still not an effective battery – the amount of electrical power wouldn’t be enough to turn on a smart TV.

“Batteries play a critical role in reducing CO2 emissions – and have come a long way with modern lithium batteries in driving the revolution in portable electronics and cell phones.

“If we’re serious about achieving net zero carbon status, we need better batteries – to power more electric vehicles and to store energy from renewable sources like wind and sun.

“It’s an exciting time to be a scientist in general, and a chemical scientist in particular – because scientific research is critical to understanding how batteries work and discovering new materials that enable us to use technologies that store more energy, are safer and more self-sufficient charge faster.

“We also need to be able to effectively recycle and reuse these batteries to enable a truly sustainable energy future.”

The Guinness World Records® title was established as part of the RSC’s ongoing commitment to advancing chemistry and a catalyst for change, along with its focus on promoting awareness and education about sustainability and the effects of climate change.

The CEOs of the Royal Society of Chemistry, Dr. Helen Pain, added, “Public concern about climate change is at record levels. Success in our Guinness World Records attempt to get the highest voltage out of a battery of fruit was tremendous fun, but the message behind it is incredibly serious and important.

“Sustainability and climate change need to be a key curriculum priority and significant joint efforts need to be made to improve access to the ways we young people across the country deliver this education. Our survey shows that there is a clear need, especially among older adolescents, women and BAME groups, to increase awareness of career and study opportunities.

“We recognize that at the Royal Society of Chemistry we need to build on our strong awareness and clear role in making information accessible to all. In addition, we need to see educators, governments, academics and the media pushing the debate further. “

After the record attempt, the used lemons were responsibly processed by Refood in Widnes, which convert food waste into biogas using the anaerobic digestion process (similar to a compost heap on an industrial scale). After further refinement, the biogas is pumped directly into the National Gas Grid. The remaining liquid is converted into organic fertilizer for local agriculture and agricultural use.