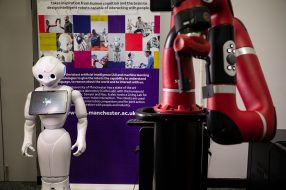 The University of Manchester is launching a new specialist multi-disciplinary center to explore developments in smart robotics through the lens of artificial intelligence (AI) and autonomous machinery.

The Manchester Center for Robotics and AI will open at the state-of-the-art Engineering and Materials campus at The University of Manchester and will provide a home for industry-leading research and innovation in AI-powered robotics.

The University of Manchester has built a modern reputation of excellence in AI and robotics, partly based on the legacy of pioneering thought leadership begun in this field in Manchester by legendary codebreaker Alan Turing.

To mark the opening of the new robotics centre, the Manchester engineering campus will host its first conference on Wednesday, Nov 23. How humans and super smart robots will live and work together will be one of the hot topics being discussed by leading experts.

The concept of ‘posthumanism’ – a future world where humans won’t be the only highly intelligent decision-makers – will be just one of the cutting edge themes forming part of the program for the inaugural conference.

Conference highlights will include a joint talk by robotics expert Dr Andy Weightman and theologian Dr Scott Midson which is expected to put a spotlight on how future of human-robot relationships might look.

Dr Weightman, who researches home-based rehabilitation robotics for people with neurological impairment, and Dr Midson, who researches theological and philosophical critiques of posthumanism, will discuss how interdisciplinary research can help with the special challenges of rehabilitation robotics – and, ultimately, what it means to be human “in the face of the promises and challenges of human enhancement through robotic and autonomous machines”.

Other topics under discussion will include applications of robotics in extreme environments. For the past decade, a pioneering Manchester team led by Professor Barry Lennox has developed robots to work safely in nuclear decommissioning sites in the UK. A robot called Lyra that has been developed by Professor Lennox’s team – and recently deployed at the Dounreay site in Scotland, the “world’s deepest nuclear clean up site” – has been listed in Time Magazine’s Top 200 innovations of 2022.

Other pioneering Manchester applications include foldable drones to characterize subterranean mines or for the inspection of offshore wind turbines. And Manchester leads on designing the verification technologies to ensure that we can trust these robots when working autonomously in hazardous conditions.

Delegates will also have a chance to observe a series of robots and autonomous machines being demoed at the new conference.

Angelo Cangelosi, Professor of Machine Learning and Robotics at Manchester, said the University offers a world-leading position in the field of autonomous systems – a technology that will be an integral part of our future world.

Professor Cangelosi, co-Director of the Manchester Center for Robotics and AI, said: “We are delighted to host our inaugural conference which will provide a special showcase for our diverse academic expertise to design robotics for a variety of real world applications.

“Our research and innovation team are at the interface between robotics, autonomy and AI – and their knowledge is drawn from across the University’s disciplines, including biological and medical sciences – as well the humanities and even theology.

“This rich diversity Manchester offers a distinctive approach to designing robots and autonomous systems for real world applications, especially when combined with our novel use of AI-based knowledge.”