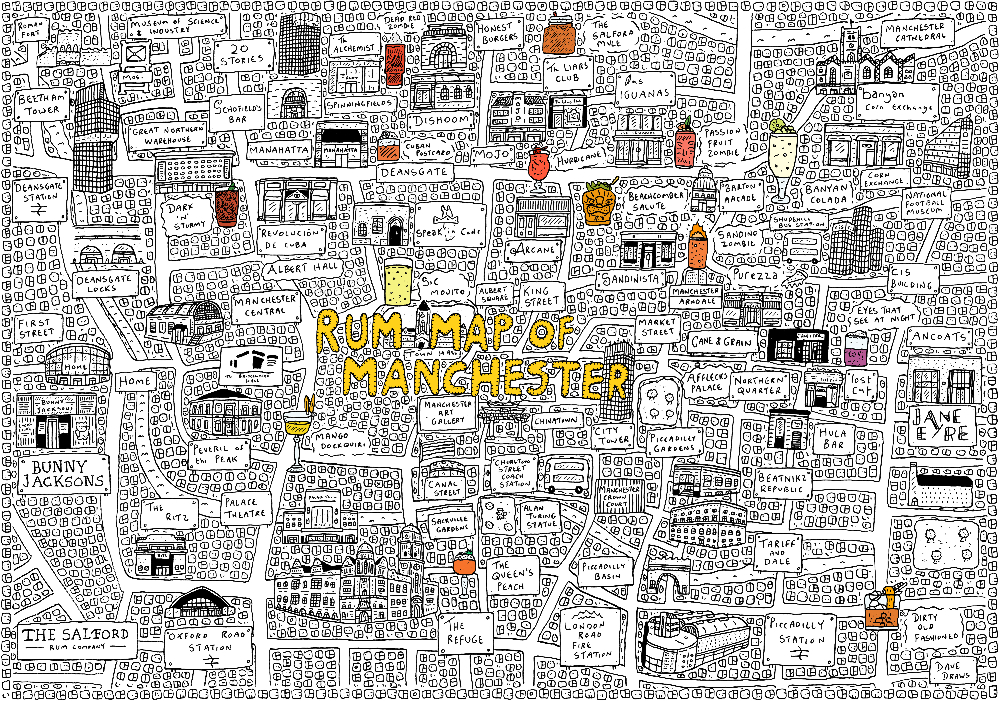 To celebrate World Rum Day, bring Manchester and Salford’s hospitality community together AND raise money for charity, The Salford Rum Company created the first Rum Map of Manchester – with a little help from the area’s rum lovers!

The Salford Rum team asked their social supporters to name their favorite rum venues and rum cocktails in town, and Greater Manchester drinkers did not disappoint; name many great bars and drinks marked on the map that is supposed to be a happy celebration of rum for the city.

Created by local artist Dave Draws, known for his intricate and popular maps of northern towns and villages, the map includes, for the first time ever, color sketches of cocktails and serving, as well as the venues themselves. It has many notable eateries selling great rum and rum cocktails, including Sandinista, The Refuge, Speak in Code, Revolucion de Cuba, Arcane, Tarriff and Dale, Manahatta, Mojo, and Banyan.

Rum fans in the area will be delighted to learn that they can download the final map for FREE – with voluntary donations to the Salford Lads Club – or prints on www.salfordrum.com for £ 10 + postage (go direct with £ 10) can buy at the Salford Lad’s Club fundraiser).

The Salford Lads Club is fully volunteer-run and provides much-needed opportunities for young people in the area in sports and the arts.

Tommy Gaughan, Co-Founder of Salford Rum, said: “The card was designed to celebrate rum and many of the incredible bars and venues we have in central Manchester and Salford – and to support them after such a challenging year. Although we topped the map, we wanted to include all the great bars and we are proud to present such a wide range of rums from here in the North West, the UK and around the world – and the result is simply awesome!

“We’d also like to thank all of our great fans and the Greater Manchester rum-drinking community for participating and helping create the menu with their recommendations for venues and cocktails.”

The Salford Rum Company was founded in 2018 when James Harrison and Tommy Gaughan – rugby league playing high school buddies – took inspiration from the growing gin category, which was soaring with buckets of innovation and creativity, and themselves set out to make a local premium rum that would compete with the luxury gin products on the market.

Salford Rum’s premium spiced rums are made as a passionate celebration of the history, heritage and people of Salford Docks, Greater Manchester during the late 19th and early 20th centuries. An era when the city’s Salford Docks became the UK’s third largest port, spirits take their inspiration from the Caribbean rums, fruits and spices that first landed on the UK coast.

To download the rum map for free or to order £ 10 plus postage prints, visit https://salfordrum.com/collections/all-products/products/rum-map

The JustGiving page for the initiative that raises money for the Salford Lads Club can be found here https://www.justgiving.com/fundraising/salfordrum