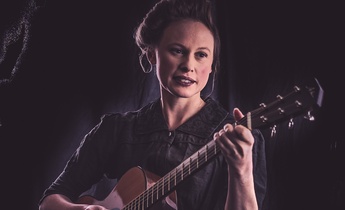 Hannah Mitchell’s extraordinary story – from domestic drudgery to Manchester City Magistrate – is told in a play that can be seen at Waterside in Sale.

Composer and singer Louise Jordan plays The Hard Way, a solo exhibition that tells the story of Hannah Mitchell. Born in rural poverty in the Derbyshire Peak District in 1872, Hannah Mitchell escapes the domestic drudgery to become an activist, public speaker, writer, suffragette, councilor and eventually a judge in Manchester City.

Following the success of her previous solo show No Petticoats Here (2016-2018), Louise Jordan received funding from Arts Council England to write a new solo performance piece on the theme of gender equality. While Louise was writing a song about the Votes for Women campaign for the UK Parliament’s Vote 100 project in 2018, she heard about Hannah Mitchell’s remarkable story and wanted to spread Hannah’s story.

“History often confines working class women to the home as inconspicuous figures destined for domestic drudgery. I want to celebrate Hannah Mitchell as a woman who spoke about the need for equality between people who became a public figure in addition to managing the workload expected of a woman born into her position. Hannah took action, took responsibility, and realized that not all change is revolutionary. The Hard Way brings Hannah’s story to life – she was funny with a dry sense of humor, intelligent, honest, and compassionate, and this gave me, as a songwriter, ample scope to write different songs that deal with a variety of human emotions and experiences deal. “

Hannah is a self-taught, self-made woman and leaves home at the age of 14 to exchange one exploitative situation for another. In 1906 she met Winston Churchill at a public meeting and continued her campaign on public platforms in Lancashire and London. This show celebrates a woman’s determination to take power in the face of insurmountable barriers, motivated by a desire to improve the lives of those around her.