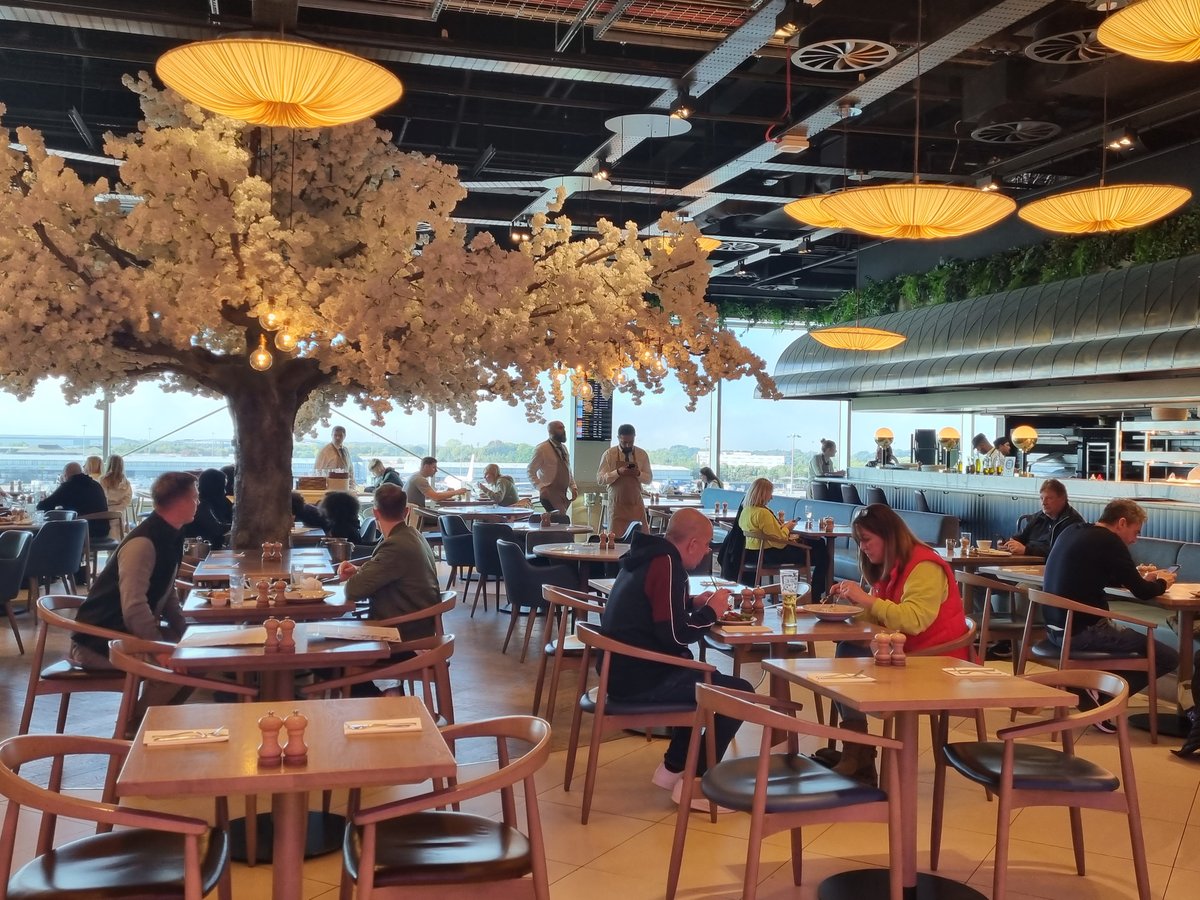 It’s an unusual location for a spot of brunch – but they do a tasty full English and awesome veggie breakfast.

San Carlo is somewhat of a Manchester institution for fans of Italian food. The chain has eight branches in the city (and a handful more in the likes of Liverpool, London and Birmingham), with the ones in the city center in King Street, St Peter’s Square and in Selfridge’s being the best known.

But there’s also now a branch a little further afield in the city which is raising the game – for airport food. Terminal Two’s expansion last year saw more than 60 new shops and restaurants added and San Carlo’s bright and breezy branch was one of them.

Airport food isn’t meant to be good traditionally – we’ve all been on the receiving end of a greasy, anaemic-looking bacon butty and shelled out a painful amount for the ‘pleasure’ at some point on our travels.

However, San Carlo’s Manchester Airport branch at Terminal Two has decided to apply the same high standards it has for its restaurants in town to its airside eatery, as we discovered when myself and a colleague stopped off for brunch on a business visit to the airport.

There was a little bit of a wait to be seated on arrival, even though we’d booked – and a sign on the front desk politely asks folk to be patient while they deal with some of the challenges all airport food outlets have faced during the bounce back from the pandemic, including a spike in traveler numbers meaning terminals are busy again with folk wanting a good feed and a nice table to relax at pre-flight.

Nevertheless, we’re soon seated at a pleasant table, underneath a centrepiece cherry blossom tree feature in the center of the restaurant, with a good view of the runways once the morning mist clears and the blinds are lifted.

Service is cheerful and welcoming and the menu is pretty extensive when it comes to breakfast and brunch options and in keeping with fairly average prices for airside cafes (perhaps except the Boots meal deal!)

A full English is a real litmus test of airport food – a simple meal but satisfying meal when done well but a soggy disappointment if done badly!

To make sure we were doing a thorough job, we also ordered a veggie breakfast, and poached eggs with smoked salmon on sourdough toast.

Happily after a small wait, it all arrived hot shortly after our coffees landed and the portion sizes of the full breakfasts were generous without being overwhelming.

The full English came with sausages, bacon, mushrooms, hash browns and a fried egg as you’d expect but also a few little Italian twists – generous slabs of sourdough toast, roasted baby tomatoes on the vine and cannellini beans in a rich sauce rather than the traditional baked beans. The test of a good English in my book is whether good-quality sausages have been used, and these hefty customers definitely passed the pattern, though the bacon was a little too cripsy for my liking.

But it was the veggie breakfast which had the most pleasant surprise – some places seem to not know what to serve as an alternative to bacon and simply stick extra beans on to fill the gap. However, San Carlo has replaced it with delicious, very thinly-zested strips of courgette and mushrooms sauteed in a mouthwatering, herby sauce, and I found myself hoovering these up ahead of the meaty breakfast! The veggie sausages tasted freshly-made too and not a cop-out Quorn version out of the freezer which you sometimes get elsewhere.

As an alternative lighter option, the smoked salmon on sourdough toast, eggs done benedict style with cramy hollandaise sauce, which was just the job too – well put together with the eggs cooked just right.

We didn’t brave a mid-morning cocktail from the extensive bar behind us, but perhaps we’ll return to sample them another time when we’re not on a work trip, and set our holidays off to a fine start.