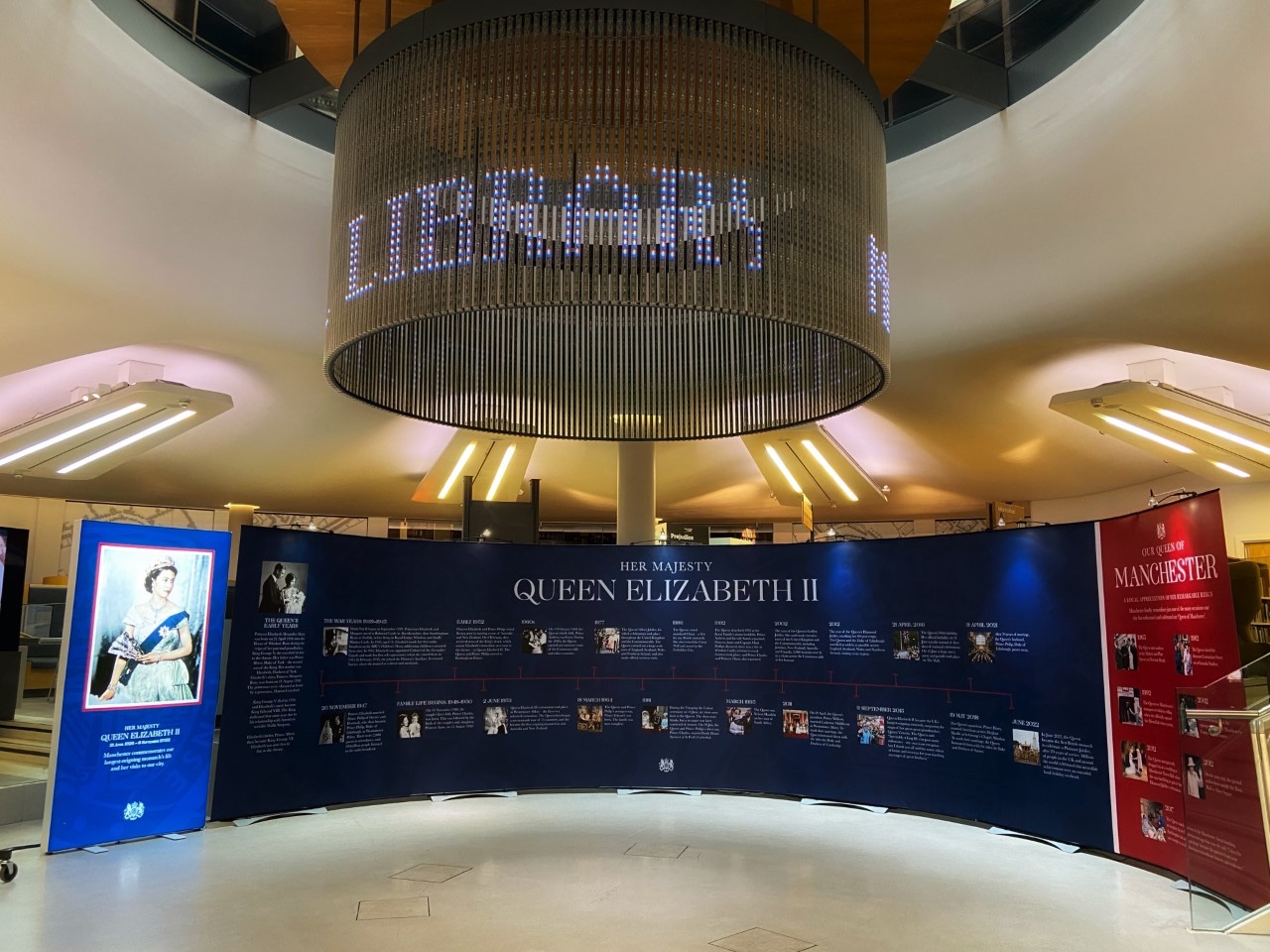 Manchester City Council launched a library photo and video exhibition to commemorate the life of the late Queen Elizabeth II and her visits to Manchester.

Starting from her birth in 1926, the carefully curated exhibition follows the key milestones of Queen Elizabeth’s life. It also, celebrates her reign, her links to Manchester, and her life-long commitment to the United Kingdom and the Commonwealth.

Visitors will be able to see special footage of the queen that has been extracted from historic archives especially for this exhibition. The video clips, produced by Manchester Metropolitan University’s North West Film Archive, accompany the exhibition and give an insight into how our lives and Manchester, changed during Queen Elizabeth II’s reign.

The exhibition is on display in Central Library on the Ground Floor, in the Archives+ area, and Manchester City Council invite people of all ages to drop-in and visit the exhibition and commemorate the Queen.

Leader of the Council, Cllr Bev Craig, said:
“The Queen Elizabeth II and Manchester Exhibition is a tribute to the tragic passing of Queen Elizabeth II. We extend our condolences to the Queen’s family and the nation.

“The world changed in many ways during the Queen Elizabeth II’s lifetime and she was a constant for British people through rapidly changing times.

“We remember her visits to the city over the years, both on happy occasions such as when she opened the 2002 Commonwealth Games, and celebrated her Diamond Jubilee in 2012, and darker moments such as when she helped comfort young people injured in the 22 May 2017 terror attack at Manchester Arena.

“This exhibition allows us to honor her death and her outstanding contribution to the United Kingdom, with a special focus on her relationship with Manchester. This exhibition includes archived photos and video footage of 16 of her visits to Greater Manchester throughout her reign.

“As our country comes together to remember the Queen, this is one of the ways in Manchester that we are commemorating her reign and life-long dedication to serving us.

“I’d encourage all Mancunians to come to pay their respects to the late Queen here and to honor and remember her life.”

“As a city we are mourning the loss of Queen Elizabeth II and commemorating her historic legacy. She was a remarkable monarch and stood by the British people for 70 years. Throughout those 70 years she was a guiding light for all, and she served with kindness, compassion and integrity.

“It’s important for us to pay our respects and remember Queen Elizabeth II’s life and her life-long service as sovereign. Books of condolence are situated in Central Library’s Reading Room giving Manchester’s residents the opportunity to leave their own written tributes.

“This exhibition allows us to pay our respects to her legacy, her life and her great spirit. It is an honor to be here today to launch it.”