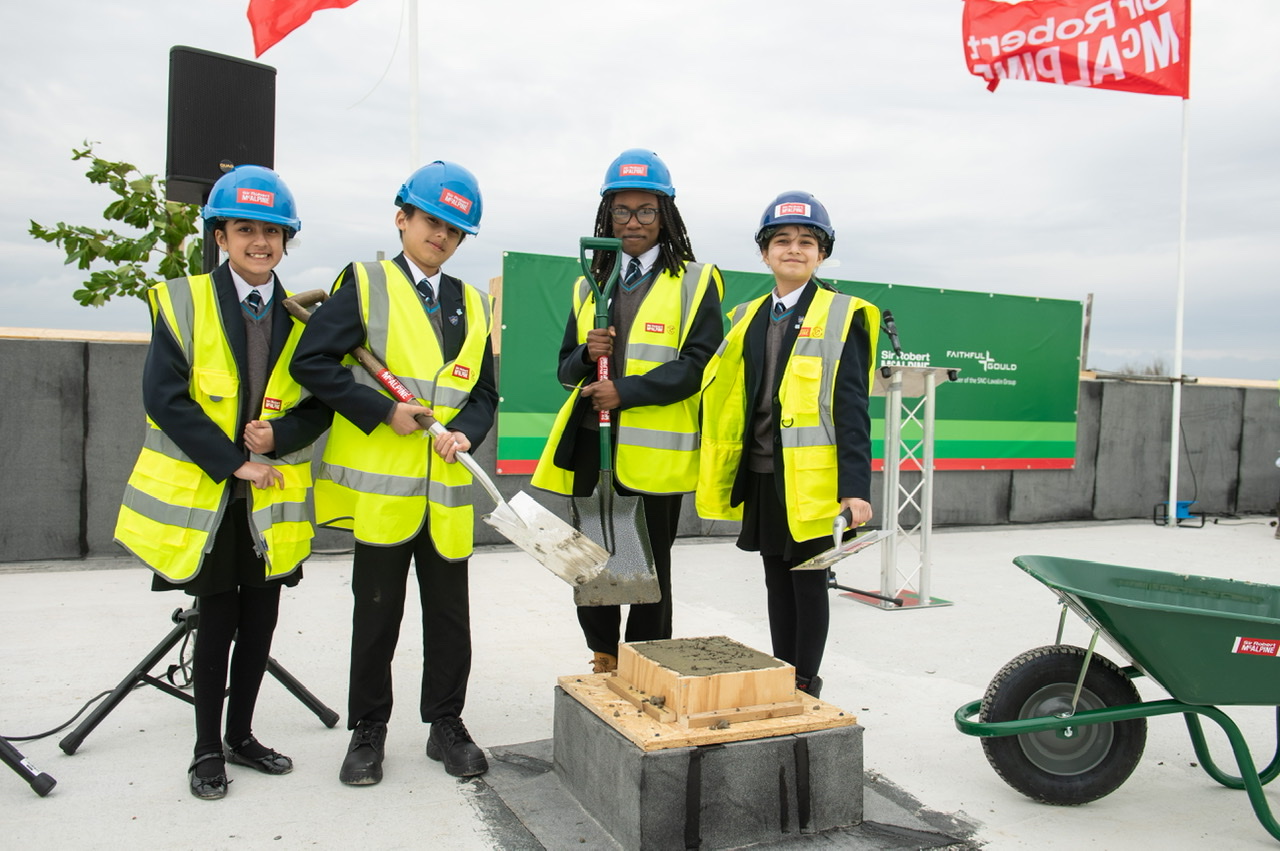 Pupils at Manchester’s newest high school were given a bird’s eye ‘Belle Vue’ when they inspected progress on their brand-new school last week and took part in a traditional ‘topping-out’ ceremony to mark the final phase of its construction.

Students from Co-op Academy Belle Vue joined chiefs from the city council, Co-op, and construction company Sir Robert McAlpine Ltd on the roof of their new school building for the topping out ceremony, which saw them help with the pouring of concrete on top of a traditional good luck evergreen laurel bow, that will remain set within the building’s structure forever.

Pupils are also celebrating the news that building work is well ahead of schedule, and rather than moving into their new school premises in September 2023, work on the project is now expected to be finished later this year, with pupils able to move in some time in the first half of the next academic year 2022/23.

For now, Co-op Academy Belle Vue is operating in temporary premises within Connell College in east Manchester, having opened its doors for the first time to 120 Year 7 students last September 2021. The co-educational school will continue to admit pupils into Year 7 each successive year until it reaches full capacity with students in each year group by 2025.

The state-of-the-art new school occupies a 12.6 acre site bounded by Hyde Road and Kirkmanshulme Lane, on land formerly occupied by the Showcase Cinema. The main school building is three storeys high, with a teaching block, an adjoining drama block, and a two-storey sports block that has a separate entrance for out of hours use by the wider Belle Vue community, alongside a 140-space car park .

The main three-storey building includes the school’s reception, a community hub with a library on the floor above, and a dining hall.

To the rear of the building there will be two large playing fields and a multi-use games area with courts to accommodate tennis and basketball, a five-a-side football pitch, and training areas for netball and hockey.

Councilor Garry Bridges, Executive Member for Children and Schools, Manchester City Council, said: “Co-op have a good track record of operating schools in Manchester and elsewhere and it’s great to see them at the helm of a much-needed brand new school in this part of the city.

“The academy might have only opened a few months ago – and in temporary accommodation for now – but it’s already making a positive difference to its pupils. It’s brilliant news therefore that building work on their new school building is well-ahead of schedule and that pupils are now going to be able to move in a lot sooner than planned and well before the original date set of September 2023.

“Our children and young people deserve the best education, delivered in the best buildings, and this is what we’re determined to ensure they get.”

The Co-op Academies Trust – which already operates 26 schools and colleges across the north of England including in north Manchester – was chosen by the DFE, working in partnership with the council, to run the new school.