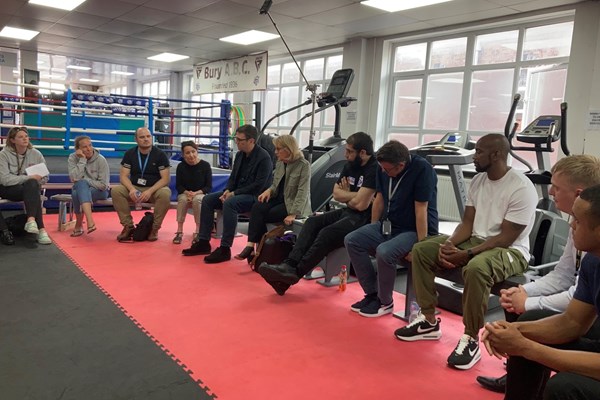 Leaders, community members, and young people have met for a second time to discuss signs of progress and changes local young people want to see to make the city region safer.

The group first met in April, where the Mayor of Greater Manchester, Andy Burnham, reinforced his commitment to tackle knife crime and serious violence.

At the latest meeting – on Friday 21 October – the roundtable heard that in July and August 2022, there were 17 per cent fewer A&E attendances of victims of an assault aged under-25, compared to summer 2021 – this equated to 83 fewer A&E visits and continues a three-year downward trend.

“As a result of a comprehensive program of work to reduce violence over the summer involving police, charities, local authorities, and others, we have seen a significant drop in A&E attendances this year compared with previous years, but we know there is more work to do.

“The Violence Reduction Unit is working closely with partners and the community to provide interventions for the most vulnerable young people, and it is vitally important that we continue to include young people in these conversations.”

Recommendations from 120 young people on how to make Greater Manchester a safer and fairer place were gathered at the recent Hope Hack event, hosted by the Violence Reduction Unit and the Hope Collective, a grassroots organization formed in partnership with the Damilola Taylor Trust and other public and voluntary bodies to create real change for young people and communities across the UK. The event included a series of workshops covering topics like education, social media, and mental and physical health.

Recommendations included more education around the dangers and positive use of social media, better relationships with the police, and more education on vulnerability and the signs of exploitation. At the 21 October roundtable, the Mayor and Deputy Mayor committed to acting upon these recommendations.

“The Hope Hack event continued an important conversation about how we create a fairer and safer society, and as leaders we are committed to using this insight to create real change and opportunities for young people living in Greater Manchester. Our young people have a unique insight into the problems we face and hold the key to how we can make positive changes.

“That’s why today I am pleased to commit to more education on social media, signs of exploitation and continuing to build relationships between young people and the police.”

“The progress made since we last met as a group is fantastic to see, although we know of course that there is more work to do.

“The way to tackle knife crime and serious violence among young people is to work with young people to understand from them how the issues can be addressed, and that’s why I am so pleased to be able to commit to acting upon the recommendations we have received .”

Other attendees included young people from Greater Manchester’s Youth Combined Authority and the Hope Collective’s Youth Management Group, as well as people with lived experience of serious violence including Matthew Norford CEO of 1Message, a service that offers one-to-one mentoring for young people who are at risk of or engaged in anti-social and criminal activity, and Kelly Brown CEO of Mero’s World.

In the coming months, the Violence Reduction Unit will build on work with schools and continue to grow local partnerships, trial a new program in the city of Manchester and Trafford to provide realistic opportunities to achieve positive change to young people affected by criminality, and deliver a project that supports young people in years four, five and six experiencing pronounced levels of adversity as they transition to high school.