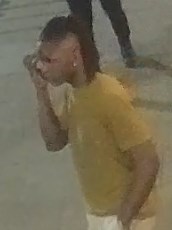 The victims officers were in a nearby licensed premises near the junction of Deansgate and Peter Street when they witnessed an unknown male having an altercation with two unknown males. Following

They befriended the unknown male and his girlfriend but just before 2.15am, they left the licensed premises.

Immediately afterwards, one suspect, who was lying in wait by hiding in doorways and behind vehicles whilst using his mobile phone, was picked up by a black Nissan Qashqai which was driven along Peter Street before turning right on to Jerusalem Place.

The two occupants then fled the vehicle before running back to Peter Street where they attacked the victims for around one minute before making their way back to the vehicle, which left the city center via Bootle Street, Deansgate and Quay Street.

Detective Sergeant Paddy Connell, of GMP’s City of Manchester division CID, said: “I cannot express the severity of this attack – the victims were struck with a brick numerous times to the head before being punched and kicked. As our investigation continues, we wish them a speedy recovery.

“It is imperative that we identify all involved so we can bring those responsible to face justice.

“We are now in a position to appeal to members of the public for help to identify the man in the image, who we would like to speak to about the incident. We are also appealing for anyone with information, whether this be a verbal account or images from CCTV or dash cam, to contact us.”

“Finally, we are appealing for the unknown male and his girlfriend to come forward. We have reason to believe that they are from Merseyside. I would like to stress that they are not suspects in this investigation but we believe they may have vital information which can assist us.”