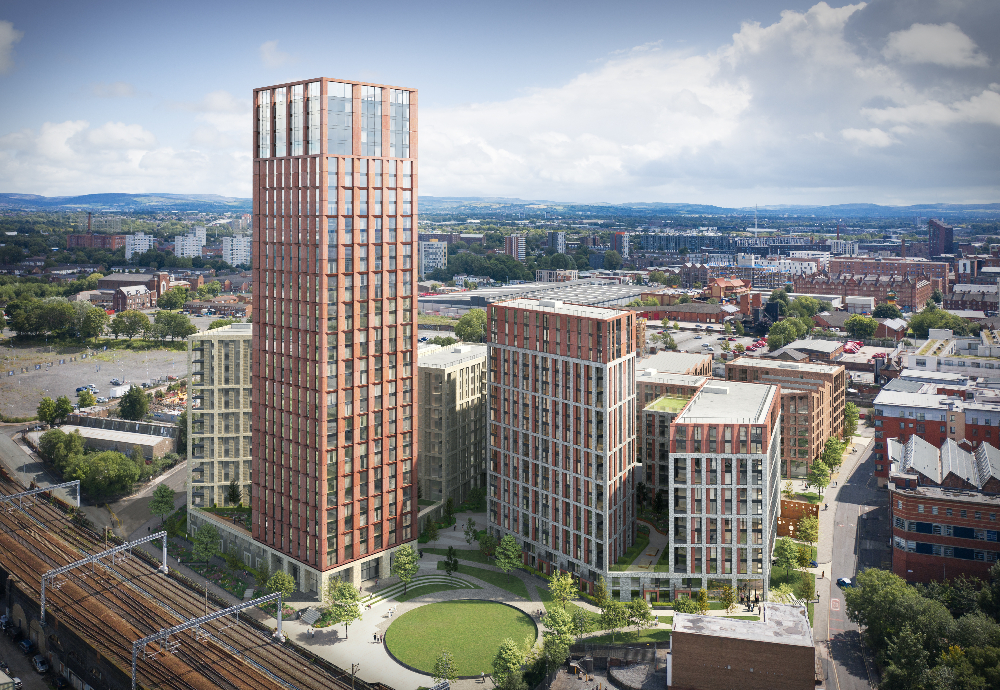 Plans for a groundbreaking £ 400 million city center regeneration program that will create more than 1,200 homes have been approved by the Manchester City Council Planning Committee.

MCR Property Group’s bold Gasworks New Town project will create 1,202 homes with a mix of attractive townhouses and apartments on the site of the former Rochdale Road Gas Works in the heart of Manchester.

The 6.6 hectare site has had a parking lot for years, which has contributed little to the public space, but that will change in the next few years as the first residents are expected to move in by the end of 2023.

Not only will the huge project dramatically improve the housing supply, but this flagship will create a new focal point for central Manchester that will create thousands of jobs and generate tens of millions of pounds for the city’s economy.

MCR bought the site in 2015 with big plans to use it as a launch pad to rejuvenate the immediate area with mixed-use destination development. Working with local stakeholders and the planning department, the team went through dozens of iterations to keep the balance between housing, design and environmental facilities in perfect balance. It was approved by the Manchester City Council Planning Committee yesterday (Thursday).

The project – which will have a Gross Development Value (GDV) of around £ 400m at current prices – will comprise 192 square meters of commercial space and will be housed in nine separate buildings ranging from 8 to 34 stories high. The project is being built in four phases and is slated to begin this summer, while the tallest residential tower is slated to be completed by the end of 2030.

Architects, AHR, added 1,224 bicycle parking spaces as part of a determined effort to encourage more people to walk and cycle and help reduce traffic on local roads. Where there are underground parking spaces, electric charging stations will be set up in the bays for the next generation of environmentally friendly vehicles.

A public park is planned between Gould Street and Bromley Street, as well as a pedestrian and bike path that runs through the site from east to west. It is the most carbon efficient development of its kind Manchester has ever seen and will save 300 tonnes of CO per year, exceeding the Council’s target for new developments by 30%.

The Gasworks New Town neighborhood is one of seven neighborhoods earmarked under the £ 4 billion Victoria North Master Plan, formerly known as the Northern Gateway Strategic Regeneration Framework. This master plan envisages that the entire area north of the city center will be redesigned over 383 hectares with the delivery of 15,000 new apartments over the next 20 years.

The gasworks itself will act as an important anchor for this vision as it was one of the first major construction projects to receive planning permission and is so close to the city center. It is a short walk from the Northern Quarter, Ancoats and NOMA, while Manchester Victoria Train Station is just minutes away.

A total of 85 affordable apartments will be available under shared ownership – among the majority available from all redevelopment locations in the city center – and that number could increase in the fourth phase of the program.

The MCR team of consultants for the project comprised the planning office WSP, the civil engineers BDP, the architects AHR, the landscape architects Planit-IE and the motorway consultancy company Curtins. MCR also worked closely with the international developer Far East Consortium (FEC), which, together with Manchester City Council, is funding and developing the Victoria North master plan.

Founded in Manchester in 1989, MCR Property Group has a national focus and has developed residential, commercial and industrial properties valued at over £ 5 billion.

“This is the jewel in the MCR crown. We are a Manchester based company and this is an incredibly proud moment for the company.

“We all felt a responsibility to create something spectacular on our home soil, and there is no doubt that the gasworks will be an exciting and inspiring place to live and work.

“We are particularly proud of the environmental impact of the project claiming the crown for the most carbon efficient development of its kind Manchester has ever seen. This really is a concept for the next century, with electric charging stations in every parking lot and more than 1,000 bike spaces making this one of the most bike and pedestrian friendly housing developments in the country. ”

“As one of Victoria North’s up and coming neighborhoods, New Town is aptly named. The development of the gasworks will breathe life into a largely forgotten corner of the inner city outskirts and give meaning and energy to an area currently characterized by above-ground parking lots.

“Housing investments on this scale should be celebrated and will go a long way in meeting the demand for quality housing in this part of the city. And once again developments like this show a real confidence in Manchester as an attractive location for investments and business – the importance of which should not be underestimated with regard to the economic recovery after the pandemic. “