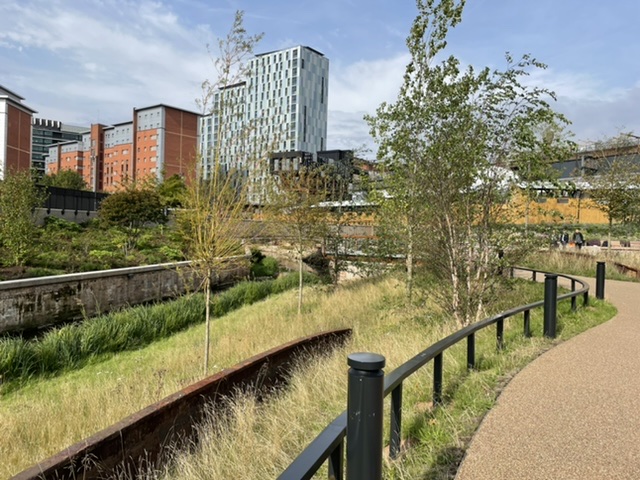 Manchester’s first new public park in more than a century has officially opened, transforming an area of ​​the city that once gave birth to the industrial revolution into a lush, green urban oasis.

The 6.5-acre Mayfield Park is the first step in the £1.5bn Mayfield master plan which is creating a new sustainable, mixed-use neighborhood in the city center – one of the UK’s largest urban regeneration projects.

Located next to the city’s Piccadilly train station, Mayfield Park provides Manchester city center with a family-friendly, inclusive greenspace with major ecological and sustainability benefits, in an area that was the epicenter of the British textiles industry during the Industrial Revolution.

What was once a thriving network of print and dye works, breweries and bathhouses is now home to a diverse range of 120 mature and semi-mature trees, 120,000 plants and shrubs, a vast public lawn, tranquil riverside walkways and the city’s largest play area. With future phases of development due to start imminently, the project will see jobs, communities and economic development return to previously forgotten part of Manchester’s industrial heritage.

At the heart of the park is the River Medlock – one of Manchester’s three founding rivers – which after more than 50 years under a concrete covering has been restored as a haven for nature. It has already attracted Kingfishers, Brown Trout, ducks and Canadian geese to populate previously derelict industrial land.

The park will act as a green lung for Manchester city centre, helping the city to meet its ambitious target of becoming net zero carbon by 2038. By recycling and reusing of materials during the construction, more than 240 tonnes of CO2 has already been saved. The park’s Lawns and plants will benefit from a sustainable source of irrigation, thanks to a series of functioning Victorian wells which were discovered during construction, saving one tonne of carbon per year and up to three million liters of water.

Martyn Evans, Creative Director at U+I, said: “After more than six years of planning, design and construction, working with our public partners and the local community, we are beyond thrilled to finally welcome the people of Manchester to their new park .

“Mayfield has always been an industrial part of this great city. In Victorian times it was a city within a city, powering Manchester’s role in the Industrial Revolution. As we look to the future it feels entirely appropriate that Mayfield will set a new blueprint for the creation of beautiful, progressive, sustainable neighbourhoods.

“All too often, green space is an afterthought in development. We wanted the city to feel an instant connection with this place, so we began with a park. As a new neighborhood grows around the park, the stunning views and tranquil spaces will be a key reason why people choose to live and work here.”

Cllr Bev Craig, Leader of Manchester City Council said: “To see Mayfield come to life today has been a wonderful experience. And to see the park go from visualization to reality –
and surpass our expectations – is a credit to the hard work that has gone into building and sculpting this former brownfield land into a world-class green space that this city, and local people, can be truly proud of.

“We believe in the power of this sort of space to be the green heart of our communities, which is why quality public areas should be considered a fundamental to development in Manchester. We know that access to green spaces have huge health and well-being benefits and I hope Mayfield Park becomes an oasis for our residents.

“This park marks the beginning of a long-term transformation for this part of Manchester – starting with the green space as a statement of intent about what we want to achieve as part of this highly sustainable, low carbon program of regeneration. Along with the clear commitment we have to becoming a zero carbon city by 2038.”