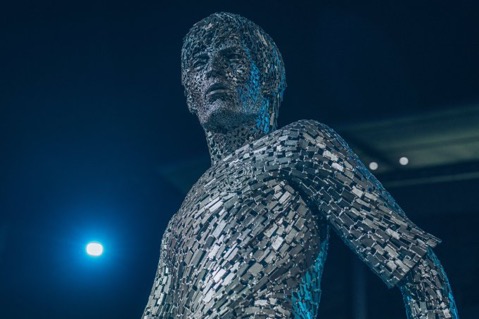 The statues emerged from the dark into the first visible light at dawn this morning and were revealed to fans around the world with a specially commissioned video for the occasion.

Located on the east side of the Etihad Stadium, the large-format statues of Kompany and Silva were created by award-winning sculptor Andy Scott and constructed from thousands of welded pieces of galvanized steel. At night, the statues are specially illuminated with blue-tinted light.

Born and raised in Glasgow and a graduate of the city’s School of Art, Scott is one of the most respected sculptors of his generation and known for the large-format figurative pieces he creates by combining traditional craftsmanship with modern manufacturing techniques.

His portfolio of more than 80 contemporary projects can be found in both the UK and many parts of the world.

Andy, who now creates in his studio in Philadelphia, USA, counts The Kelpies and Beacon of Hope among his most famous works.
Unique are the Kompany and Silva projects entirely from a distance, from Scott securing the order in June 2020 to the creation, completion and transportation of the pieces by Etihad Cargo from Philadelphia to Manchester earlier this month.

The permanent statues now erected in the Etihad Stadium are a visible reminder of the crucial role that both Kompany and Silva played in the most highly decorated era in the club’s 127-year history.
Regarding the statues after they were installed in the stadium, Andy Scott said:

“It’s an exciting thing to be part of it, to create something that becomes part of this landscape that means so much to so many people. Football projects in particular awaken and embody the pride that people have in a place and a club.

I hope Manchester City fans enjoy these works of art and appreciate them as a tribute to these two football icons. I am deeply honored to have been asked to do them, and I’ve done my best to live up to them and their achievements. “

“The fans of today’s game are among the very first to see the statues in person and up close, and I hope they bring back memories of the truly magical moments both men created over 10 years.

Andy’s prowess not only captures the strength and athleticism of David and Vincent, but his contemporary approach, along with his chosen medium of industrial materials, makes his work very much in keeping with Manchester City’s DNA.

With the work already under way, we all look forward to honoring Sergio Agüero’s legacy in the same way next year and giving future generations the opportunity to be reminded of the era of city football when all three men did so were important. “

“I didn’t expect to be recognized in this way by such a great club. My wife is from Manchester, my children were born in Manchester, and they return to a place where they can see something that represents what their father achieved and I cannot describe that.
When I first saw the statue I couldn’t believe how big it was, but then again, I’m a big boy so fair enough! And then above all the pose, that means a lot to me. “
David Silva said:

“Being with City changed my life. I’m proud of what we’ve achieved together, and I’m emotional that it was so recognized.
When I first saw the statue, I felt fine, I thought it was like mine. This statue really represents my way of playing, I love the pose the sculptor chose. It really reminds me of the times I was on the pitch and the moment I had to find the striker. “