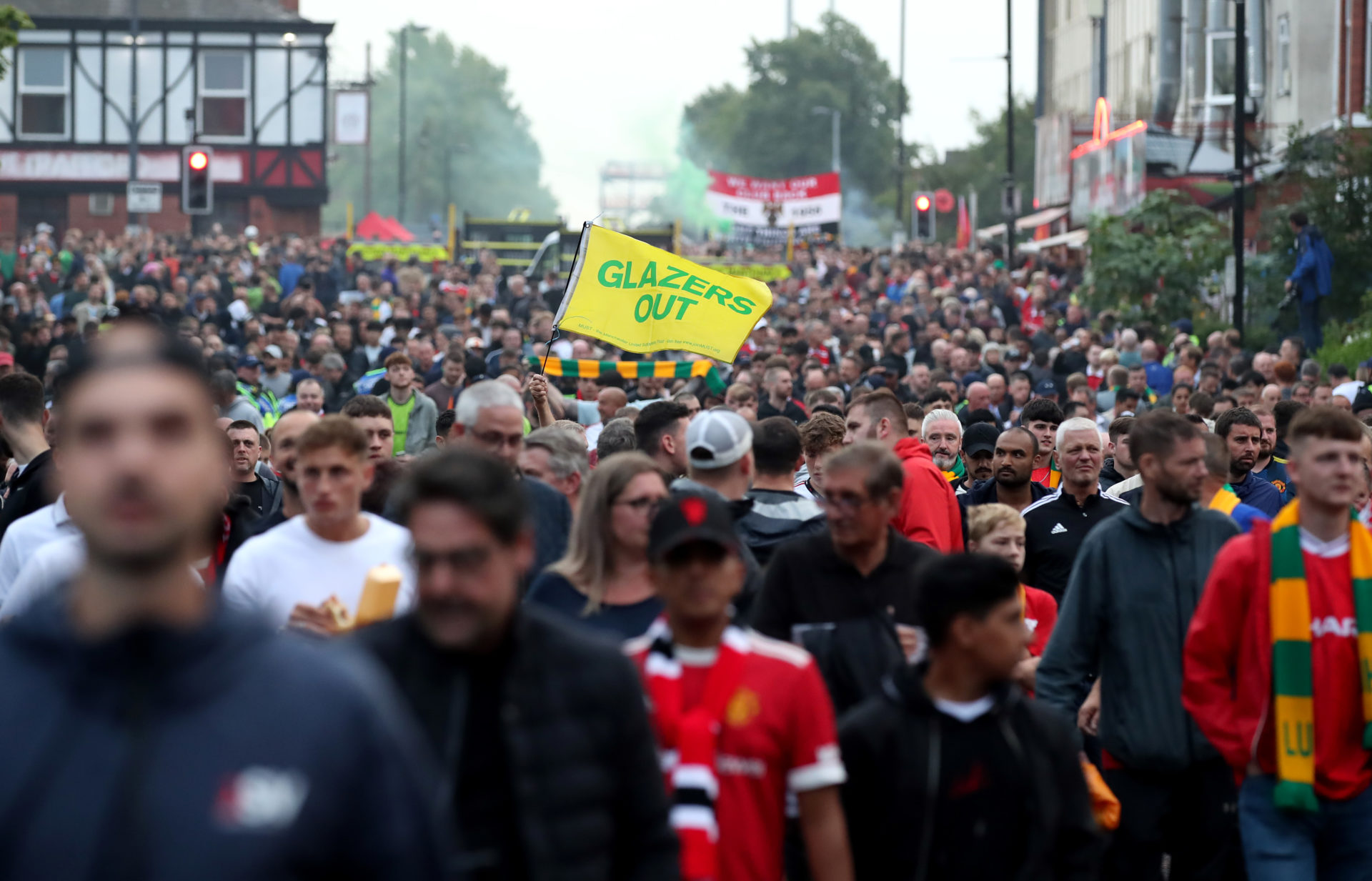 Manchester United are basking in the aftermath of a win over Liverpool on Monday night. But this is a club only one game away from a crisis, and a loss to Southampton will set up a panicked last few days of the transfer window.

Raging away in the background is vociferous anti-Glazer sentiment, with Manchester United supporters making their voices heard with a large scale protest before Monday night’s game.

More than 10,000 fans marched on Old Trafford in an organized and peaceful protest, even if a much discussed (on social media) stay away failed to materialise.

The 1958 group, behind the protest march, have pledged to continue persistent protesting, with more expected for the next home fixture against Arsenal in September.

Why it’s been a bad week for the Glazers

The protests highlighted the anti-Glazer anger among United fans, although, considering how supporters got the game called off in 2021, they probably got off lightly this time around.

However, some of the tactics employed by Manchester United in recent days has painted the club in a desperate light.

Footage emerged of supporters’ anti-Glazer banners being confiscated inside Old Trafford ahead of the game by club security.

This prompted anger, with MUST releasing a statement, which suggested United have backtracked on the policy.

The supporters’ trust said they have ‘raised concerns with the club over unreasonable confiscation of banners inside the stadium at the match on Monday night.’

“We have been informed that the club has already spoken directly to the individuals concerned and have apologised, for the banners being removed. They are making arrangements to return the banners which they have stated should not have been confiscated. The club have also said they will be reminding all match day staff / stewards of the policies ahead of the Arsenal game to avoid any repeat.”

Another laughable tactic from Manchester United came via the club’s social media team. A video was released of new signing Casemiro being introduced at Old Trafford – without the anti-Glazer chants in the background.

Supporters relentlessly mocked the video online, which was a clear PR own goal, showing how the club is trying to quieten and cover up the Glazers Out protest movement and dissention. This was pure propaganda, which the club were rightly called out on.

Why it’s been a bad week for United fans

It would be wrong to say it has been all bad news for the Glazers, who appear as determined as ever to ride out the current storm.

The combination of a win over Liverpool and transfer distractions has inevitably taken focus away from the simmering anger which was boiling among the fanbase after the season began with two defeats.

Rumors of a late spending spree have also subsided since the win.

The billionaire declared interest in a takeover last week, via The Times, but for now, this has fallen on obstructively deaf ears.

ESPN report Ratcliffe has heard nothing from the Glazers since expressing his desire to buy the club, with ‘no sign’ the current owners are willing to relinquish control.

The Ratcliffe news created a real buzz last week, and still provides hope. But the Glazers being predictably stubborn was a problem every supporter feared.

It is up to fans to now keep the pressure on and attempt to encourage the Glazers to go, and sell to an owner with the funds and the right intentions. But any hopes that a transition would be swift or straightforward, appear to have had a reality check.