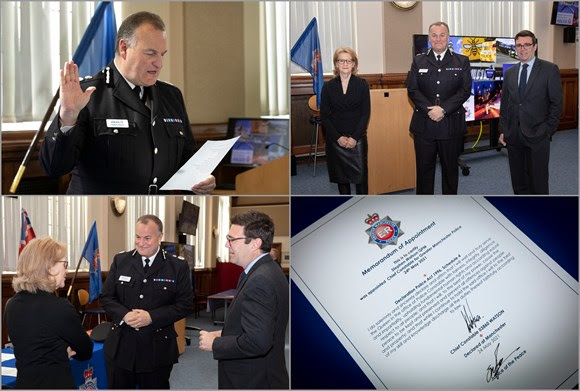 In the presence of Magistrate Steven Paine, CC Stephen Watson swore his oath and signed the Memorandum of Appointment, officially confirming his appointment as GMP Chief Constable.

Shortly after his certification, Chief Constable Watson gave an opening speech to representatives of the entire force, in which he set out his vision for the organization and the immediate actions that will take effect in the coming weeks.

Stephen Watson QPM, Chief Constable, said: “It is my special honor to serve as Chief Constable for Greater Manchester. It is humbling to be entrusted with leading so many talented, professional, and courageous people – people who faithfully serve our communities every day.

“Whatever the difficulties of GMP right now, we should never forget that we work with many thousands of people who routinely do what others either couldn’t or wouldn’t. The vast majority of our officers and employees do exceptional work and deserve our respect and tireless support.

“And while I suspect the majority of the public instinctively know this and support the force, I want all the people of Greater Manchester to be proud of their police force and to rely on the knowledge that we are the avant-garde to keep them and their loved ones safe .

“Our collective mission is to quickly get GMP to a place where it is objectively recognized as a force doing the basics superbly. We are here to lead the fight against criminals, to protect people and their families from those who would harm them, and to work with others to solve problems in our communities in ways that either prevent or do harm altogether offended or at least reduced the incidents of the same.

“Of course there is still a lot to be done, but it is very important to me to emphasize that Greater Manchester is loyally served by thousands of dedicated people who are truly first class and I look forward to working with them. The next chapter in the history of the Greater Manchester Police begins with immediate effect. “

Greater Manchester Mayor Andy Burnham said: “Today is the dawn of a new era for Greater Manchester Police and I am confident that in Stephen Watson we have found the right person to lead the necessary changes. He brings a wealth of experience to the role after successfully leading improvements in the South Yorkshire Police.

“I look forward to working with our new Chief Constable to strengthen the service GMP provides to our communities. I know Chief Constable Watson is determined to make real change happen and create the victim-centered and accountable police that I said I want to see. “

“Chief Constable Watson is very experienced and has worked for a number of the largest police forces in the country. Starting today, he will ensure that the skills and abilities of our dedicated officers and staff result in a successful police service that is responsive to the citizens of Greater Manchester. It’s an exciting time for the armed forces and we look forward to working together to ensure that Greater Manchester remains a safe place for people to live, work and visit. “