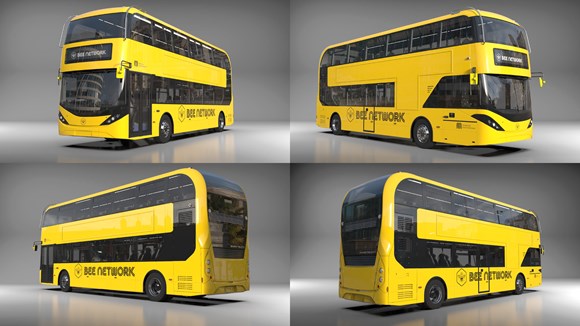 With less than a year to go before the first locally controlled bus services in 36 years take to the road, a multi-million-pound order for 50 new double-deck electric buses has been placed with manufacturer Alexander Dennis.

Due to operate across Wigan and Bolton from next September, they will be the first to bear the branding of the new Bee Network – Greater Manchester’s bold ambition for a fully integrated, London-style transport system comprising buses, trams, walking and cycling, and eventually trains.

Today, Thursday 22 September, Greater Manchester Mayor Andy Burnham revealed the distinctive black and yellow design – featuring the new Bee Network logo – for the first time, as he unveiled what the 50 new buses will look like.

It will be rolled out across the Greater Manchester bus fleet by 2025, and will also appear cycle hire bikes and, ultimately, the Metrolink network.

The new bus order and brand preview come as TfGM confirm receipt of 33 bids from operators vying to run the first locally controlled bus services in 36 years. The bids have come from nine different operators and relate to 11 different franchises that will operate across Wigan and Bolton from next September.

Andy Burnham, Mayor of Greater Manchester, said: “The countdown to bringing buses back under local control for the first time in 36 years is well and truly on. With the order placed for our first 50 new electric buses and strong interest from operators who want to run the first franchised services a year from now, the Bee Network is gathering real momentum.

“We’ve already seen a positive response to our call for people to get back on board, helped by the successful introduction of cheaper bus fares across Greater Manchester to help residents cope with the cost-of-living crisis and I’m pleased to announce that we have commenced engagement with operators about the potential to cap weekly bus tickets from early next year.

“I am also delighted to unveil a sneak peek of what the Bee Network is going to look like. We’re building on Manchester’s symbolic bee and Metrolink colors – both of which are synonymous with our city-region – to deliver something modern and iconic that reflects the first-class transport network it will become.

“Our vision for the Bee Network is bold and our case compelling; but is nothing more than our people deserve. In Greater Manchester we are leading the way when it comes to improving intra-city transport and connectivity between our villages, towns and cities.

“The previous government bought into what we are trying to do, and I underlined the importance of this partnership approach continuing during my meeting with the new Transport Secretary yesterday. By working together, we will realize our ambitions and deliver a network that will transform how people get around our city region – not just in the years ahead but for future generations.”

Alongside new and better infrastructure and services, ensuring people feel safe to travel on public transport and to use cycling and walking routes is equally important in delivering the Bee Network and critical to the future success of the city-region.

That is why the TravelSafe Partnership (TSP) has agreed that it will become, in effect, an ’11th district’ of Greater Manchester, with significant resources committed to current and future enforcement, engagement and education activity.

With its own dedicated policing unit and supported by transport staff, it will also now feature as part of Operation Avro – Greater Manchester Police’s (GMP) force-wide initiative which runs monthly to tackle criminal activity.

In the first six months of this year the TSP ran 57 operations at more than 40 locations. Almost 30,000 passengers were checked, two wanted people detained and 3,256 fines issued to people traveling without a valid ticket. In the same period, the Transport Unit made 352 arrests and conducted more than 500 stop searches.

Transport Commissioner for Greater Manchester, Vernon Everitt, said: “Ensuring people feel safe to use public transport is every bit as important as the changes we are making to services, fares and ticketing, and we know perceptions around crime and antisocial behavior can be a real barrier to people traveling.

“The overwhelming majority of customers use our services simply to go about their day and treat it with respect. There is however a small minority who do not do so. Public transport is the beating heart of our city-region that spreads to all our communities.

“That’s why we are doing more than ever to deter those committing crime and anti-social behavior and why are delighted to confirm that public transport and active travel facilities will be included as part of GMP’s excellent operation Avro initiative, effectively making the network an ‘ 11th district’ of Greater Manchester.

“This represents a major co-ordination of enforcement and support teams, now and in the future and is a key moment as we build the integrated Bee Network transport system that this growing region of the country needs, driving economic growth and creating new jobs, housing and opportunity for all.”

Currently around 60% of trips are made by car and 40% through more sustainable travel, such as public transport, cycling and walking. To support Greater Manchester’s ambition to make that split 50/50 by 2040 and with public transport use still some way below pre-pandemic levels, TfGM will next week launch its biggest ever campaign to get more people back onboard their local bus and tram service or consider moving to active travel.

Encouraging modal shift and investing in a cleaner, greener fleet is critical to the city-region’s decarbonisation ambition, and Greater Manchester remains on course to have a third of the city-region’s electric bus fleet by 2027 with all buses expected to be zero emission by 2032.

The 50 new buses will be funded from the government’s City Region Sustainable Transport Settlement (CRSTS), with around 300 more electric buses to be delivered from 2024 through to 2027. A further 170 electric buses, funded from the DfT’s Zero Emission Buses Regional Area ( ZEBRA) scheme, will run in Stockport from 2024. The move will single-handedly reduce carbon emissions by 1.1 million tonnes.

Councilor Andrew Western, Chair of Greater Manchester Transport Committee (GMTC) and clean air lead for the city-region, said: “The transformational Bee Network will be integrated and accessible, easy to understand and offer great value with capped daily fares and tickets.

“Not only will this be a significant step in improving bus services for passengers in Greater Manchester, with cleaner vehicles and better cycling and walking infrastructure it will accelerate our ambition to deliver a sustainable public transport system and become carbon neutral by 2038.

“By 2040 we want helped of all journeys to be sustainable, and the Bee Network will be the game-changer we need to get thousands more people out of their car, while also helping us make this city-region a greener and healthier place. ”

To ensure transport links are maintained as Greater Manchester works towards reforming bus services and delivering the Bee Network, Transport for Greater Manchester (TfGM) earlier this month confirmed contracts had been awarded to save more than 60 bus routes earmarked for withdrawal, a reduction in frequency or route change.

Without the intervention, some communities would have been left with much reduced – and in some cases a complete lack of – bus services, adversely impacting their ability to reach a range of critical services, including employment and education opportunities, as well as family and friends .

Anne-Marie Trevelyan, Secretary of State for Transport, said: “People up and down the country deserve a clean, reliable and affordable public transport system. That’s why we’ve provided Greater Manchester with over £1 billion to level up transport and power the local economy.

“These fifty state-of-the-art electric buses will help people in Greater Manchester benefit from cleaner air, while the additional £94 million we’re investing in the area will help to deliver frequent and timely bus services for the local communities. ”