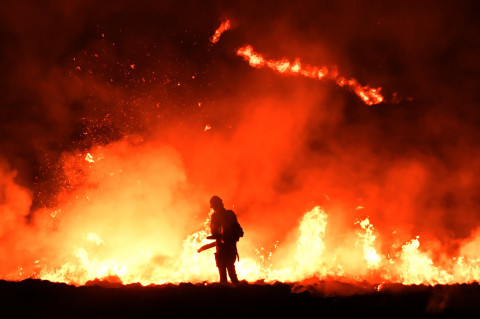 On Saturday, June 5th, World Environment Day is approaching, the Greater Manchester Fire and Rescue Service (GMFRS) is raising awareness of the devastating effects of forest fires on the environment – including bogs.

Working with local partners, GMFRS continues to remind people of the importance of preventing such incidents and avoiding the devastation and disruption that forest fires bring about.

A typical UK forest fire can be devastating to the environment. Fires can displace or even destroy wildlife and habitats, damage peat bogs – vital for carbon storage – for decades, and cause myriad other environmental hazards, including risks to human health.

The work done by GMFRS to prevent and mitigate the damage caused by forest fires supports the Greater Manchester Five-Year Environmental Plan, which sets a vision for protecting and enhancing our natural resources and the multiple benefits they offer to local communities and the economy.

GMFRS Station Manager Dave Swallow, who is also Assistant Wildfire Director at the National Fire Chiefs’ Council, said, “GMFRS is committed to supporting the Greater Manchester Five-Year Environmental Plan and, as outlined in its new Fire Plan, will refresh its sustainability strategy, to ensure that the service is resilient to the potential impact of the climate emergency.

“Forest fires can have an enormous impact on the environment, and the release of greenhouse gases into the atmosphere also contributes to climate change. For this reason, we continue to urge people to be careful when visiting the countryside and never be tempted to light barbecues or campfires in the bog.

“We are now approaching the third anniversary of the 2018 bog fires, which everyone involved will remember – from our firefighters who worked incredibly hard to put out the fires to the residents who were evicted from their homes. There is no better time to remind people that the smallest act can have disastrous consequences and the safety of people – and our natural environment. “

Bogs, often damaged by forest fires – such as those that tore down parts of Greater Manchester and adjacent areas in the summer of 2018 – can play an important role in combating climate change, sequestering carbon from the atmosphere, reducing the risk of flooding, and promoting biodiversity. As hotter summers and wetter winters become the norm, the risk from the effects of climate change is greater than ever.

Project participants mapped the size and condition of moors across the metropolitan area, including the Winter Hill area of ​​Bolton. The fire that spread through the moors in June 2018 resulted in an estimated 25,556 tons of carbon being released into the atmosphere and undermined significant protection measures by the Woodland Trust and United Utilities in the area.

“The recent forest fires in Greater Manchester and the surrounding area released thousands of tons of carbon into our atmosphere. Forest fires not only mean poorer air quality for the residents of our urban region, they also lead to the harmful emissions that we need to reduce if we want to achieve our goal of becoming climate neutral by 2038.

“We know that the people here really appreciate our spectacular nature and want our wildlife to thrive. Over the past year, conservation teams have worked hard to bring back the Manchester Argus butterfly, a large heather butterfly that has not been seen here in 150 years, to the peat bogs of our metropolitan area. As the frequency and extent of forest fires increase, if things continue like this, our endangered wildlife will go nowhere and may disappear completely. “

DEFRA – the Ministry of Environment, Food and Rural Affairs – draws attention to various environmental risks that can arise as a result of forest fires. These include the release of harmful chemicals into the aquatic environment and habitat loss. Forest fires can destroy the habitats of mammals, reptiles and ground-breeding birds.

Another risk associated with forest fires is the emission of tiny particulate matter from smoke into the atmosphere. Inhaling particles less than 2.5 microns in diameter has been shown to be harmful to health.

GMFRS is working closely with a number of partners locally and across the UK to prevent and better understand forest fires and is currently conducting a survey on behalf of the UK Fire and Rescue Services to collect public opinion on forest fires. The poll ends on August 31st. The results are to be used to shape future work around forest fires. The survey should take about 10 minutes and can be found on GMConsult.

To learn more about safety when visiting the countryside, please visit the GMFRS website.