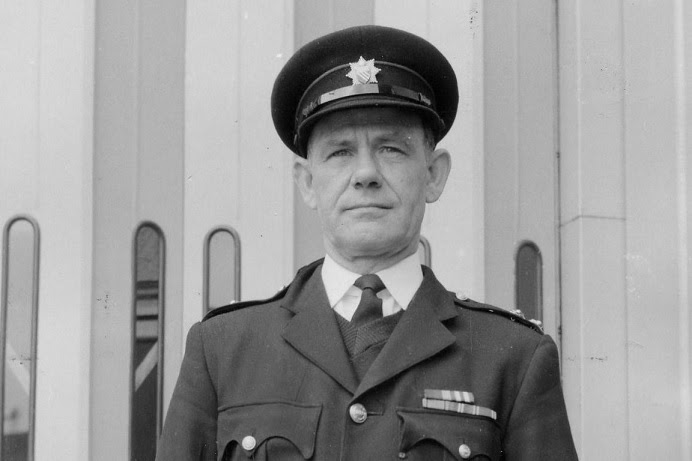 A plaque was unveiled to commemorate a fallen firefighter after another firefighter revealed details from his life and died nearly fifty years after his death.

Wilfred McLaughlan was participating in a fire in a factory on April 25, 1972 when the roof collapsed. He later died from his injuries. On the day the fire broke out, he was three days away from retirement.

Retired firefighter Graham Bowker was informed of the firefighter’s loss when he was posted at McLaughlan’s former fire station five years after his death. Although there was limited coverage or discussion of McLaughlan’s death at the time and he has no verifiable family, Bowker never forgot McLaughlan, and when the place where the fire happened was opened up, Bowker began researching the story and making inquiries a prospect to have a plaque put up on the spot.

The fire occurred at Oldham Batteries in Denton, Greater Manchester. The badge was unveiled on Friday, November 19, on the former factory site, which has now been converted into a wellness center.

“As firefighters, we are always aware of the debt we owe to our comrades who came before us. I first heard this story as a young firefighter, and it has stayed with me, even though it was about 45 years ago. When I saw the site being built I thought it was the right time to make sure McLaughlan and his victim are never forgotten. We owe it to him to make sure that doesn’t happen. “

The plaque that will be unveiled is part of the Fire Fighters Union’s Red Plaque program, which aims to commemorate firefighters who have died on duty with a plaque near the incident in question.

“As a fire brigade, we want to ensure that our predecessors are not forgotten. With their commitment and service, they have helped to build up and develop our profession, from which we all benefit today. McLaughlan and many other firefighters have made sacrifices that we must remember, and the Fire Service Union is honored to play a role in remembering Wilfred McLaughlan and his victim. “

“He was a man who always had my greatest support and respect. It seems to be a terrible tragedy to all of his friends in the brigade. “

“This is a tragic story, and I was told that this brave man had only retired a few days. With every fire, firefighters * take their lives into their own hands, but it doesn’t deter them. “