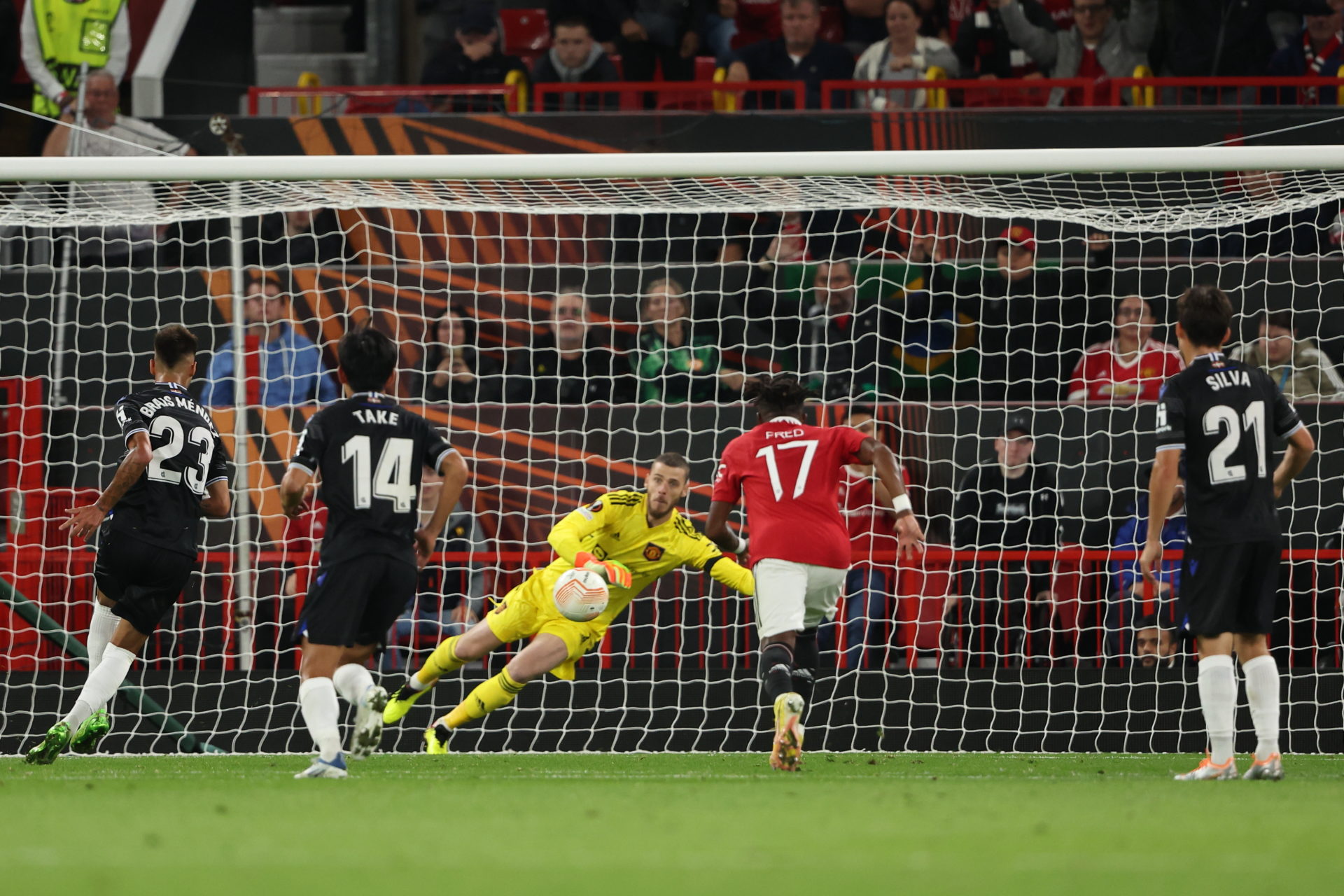 Manchester United have suffered a 1-0 defeat at home in the Europa League to Real Sociedad.

VAR fails to do its job

The match turned as a penalty was awarded against Manchester United in the second half for a handball.

Lisandro Martinez had dived to block a shot, stopping it with his knee, before it rebounded onto his arm.

It quite clearly should not have been a penalty, and VAR checked it and ruled that the decision to award it was correct.

It is at moments like these where you wonder what the point of VAR is. This was quite clearly an incident which should have been overturned.

Instead we saw two errors, one to give the penalty in the first place, and then the decision to uphold it.

Ralf Rangnick struggled to get Manchester United to press during his time in charge last season. Erik ten Hag has managed it already.

Even with Ronaldo leading the line, United pressed intensely against Real Sociedad, pushing to win the ball back in their half.

This approach was led by Fred playing in an advanced role, with Antony and Anthony Elanga both looking co-ordinated as they worked to close Sociedad down.

The problem came when United won the ball back. The team was not incisive enough, while Ronaldo blew a chance when through on goal.

Fred lacks the quality of Bruno Fernandes, but his work rate and intensity helped to compensate for what Ronaldo lacks, but even he tried hard to contribute off the ball where he could.

United’s first half performance was good and should have had a goal to show for it. The team soon paid the price for this.

Strange atmosphere due to Queen’s death

The news of The Queen’s death broke around an hour before kick-off. The match went ahead, the right decision in fairness for the traveling fans.

But instead of a raucous Old Trafford crowd cheering a team for a fifth successive win, there was a flat atmosphere for the first hour of the game.

United’s fans came into voice after going 1-0 down, and created plenty of noise. Chants of ‘We want Glazers Out’ were also heard throughout.

However, the circumstances leading into the game meant everything felt ‘off’, and we can only speculate whether that had any impact on the performance or result.

There is some uncertainty about whether Sunday’s game will go ahead. If it doesn’t, then this information would have been helpful for Erik ten Hag before kick-off – he would have picked an even stronger team.

European debut for Garnacho and McNeill

Alejandro Garnacho got what amounted to his first meaningful minutes in competitive football for Manchester United tonight.

His previous appearances had come for 10 minutes or less as a substitute, whereas this game saw him get 20 minutes plus stoppage time to try and make an impact.

It was a show of trust from Erik ten Hag, who looked towards the young Argentine to help get United back into the game, throwing him on with Jadon Sancho.

Garnacho looked good in possession but chances to become a hero didn’t come his way.

He was joined late on by Charlie McNeill, who came on to replace Tyrell Malacia and make his professional debut.

The young striker has an impressive record for United’s academy and this was a sign Erik ten Hag will give opportunities to the club’s young players.

Manchester United’s Champions League campaign began with defeat last year, which put the pressure on for the following group games.

United did not want to drop points early on again in the Europa League this year. Unfortunately, Erik ten Hag’s side will have to do things the hard way.

The next match is away at Sheriff Tiraspol, and United won’t be able to rotate too much after this result.

The team should still easily qualify, but topping the group is going to be tricky, with Real Sociedad now seizing the initiative.