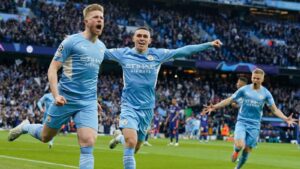 Across the potholed parishes of Manchester aspiring candidates knock on doors as next week’s local elections hove into view. With 93 of the 96 seats held by labour – and a third of them up for grabs this time around – the one party state machine is a finely-tuned juggernaut.

Stung by the Lib Dems’ success in the Ancoats & Beswick by-election, back in Feb, the ruling party have been out in force in their bid to stop the Lib Dems picking up another seat in the ward—or the Greens from snapping up a second in Woodhouse Park.

In the res Didsbury West, meanwhile, veteran pig-brawler John Leech – a winner-stays-on street-fighter whose political life consists largely of serial encounters with – will be looking to hold off Labor’s latest bid to finally unseat him. It’s a dirty business round there, of course, and the porkers like it.

Less so for rebel ex-councillor Marcia Hutchinson this time around, who, having set fire to Mancunian politics last year and – with good reason, her supporters would say – has been spending the time since putting the finishing touches to a novel. Top literary agencies 42MP are shortly to begin shopping her Manc-set manuscript The Count round the capital’s publishing houses – it being the tale of a black woman who stands for Manchester City Council only to become embroiled in a windrush deportation scandal, complete with love interest, race politics, and activists chained to an airliner as the clock runs down.

As an agency specializing in work intended for adaptation, production companies have been put on standby. Disney are reportedly in the loop. So can we expect Vin Diesel to play a thinly-disguised Pat Karney in a rehash of recent history? “Ha! No,” says Marcia, disappointingly. “I started it eighteen months ago before I was ever elected. It doesn’t have too much to do with the recent past.”

At the Etihad Stadiumit’s the game itself that takes the ball home, gleefully stuffing it up its jumper and scampering back in time for supper.

Manchester Cityon the other hand, feel almost like they’d lost.

Having had so much the better of real Madridwinning out by the odd goal in a 4-3 classic, they know their ticket for the Champions League final should already have been punched.

Two-nil up on 25 minutes, and if mahrez collects the ball with his right instead of his left he

can square for foden to finish. Three minutes later the Stopfordian drags wide when bearing in on goal. At 3-0 there’s no way back for Madrid and City close out the tie…but of course the Maker laughs when men make plans, as well we know.

As an advertisement for Sheik Mansour’s galactic ambitions on the continental stage it’s one of the most entertaining to have graced our screens: De Bruyne the caped midfielder; Foden the elven prodigy; Zinchenko the hero with heart lashed to the stitch of his sleeve.

The contest is thrilling, though, partly because minnows Madrid make it so. Outclassed, they subvert a game of circular possession into an end-to-end barnstormer. Now all City have to do is get a draw in the Bernebeu next Wednesday, which of course they’re amply equipped to do.

The more breathless it proves, mind, the more things could even up yet.

In the shadows of St Michael’s Church the strange in Jamie Lee’s voice is as delicious as it ever was. Whatever the wound is in the singer’s throat, when forced to anguish it seems to capture a yearning for deliverance alive in all of us.

It’s some years since Lee’s band MONEY electrified the scene around Salford’s White Hotel. Brooding, literate, confessional… a brace of albums for Bella Union promised the moon before the music business seemed ultimately to defeat them. There’s a legacy though…that sense of the sacred sought-for in the profane is engrained in the culture which has flowered in his absence.

It took the barest whisper of return, then, for promoters NowWave to lay on a church and a grand piano for the errant choirboy to molest. “Yes, Jamie got fat…” he quips, after we’ve followed him in procession from plague to the Hall‘s rehearsal pad. Beer-bellied, grease-painted, stripped to the waist…you wonder to what extent he represents a vulnerable figure 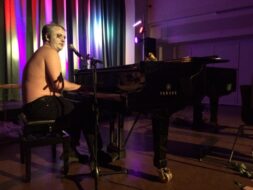 now. There’s no doubting the voice, though, as he noodles through churchy, threequarterfinished ballads…that sugared yelp still pricks the neck to goosebumps.

Sequestered at the edge of Cheetham Hill’s snide goods district the White Hotel scene arose partly in response to Northern Quarter overkill and the banality of municipal cultural provision. But whereas the songsmiths who emerged from that Noughties NQ4 scene – the Guy Garveys other John Bramwells who flounced from Big hands to Temple to road house other night & day – were able to make the step up, there’s been less of that from the Salford underground in the shadow of Strangeways.

Does there need to be, you might ask? After all, this is a different age. It’s a question Lee will ask no doubt himself.