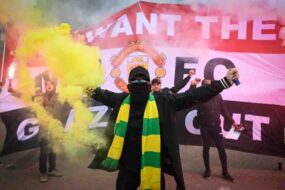 The results of the Manchester United Supporters Trust mega-poll, this week, made for precipitous reading. It will have come as a surprise to exactly nobody that diehards at the Theater of Restricted Legroom are a far-from-happy breed. But in quantifying the despair of the twenty thousand or so respondents – and setting aside the unmissable quaintness that thousands of Manchester United fans have remained members of an organization which hopes one day to be running the club on their behalf – the stats served up a reminder of what a big year this is going to be for English football, where the black clouds have reached a supposedly critical mass.

If Manchester United fans think the universe is pointless then how is everyone else supposed to feel?

The big picture is straightforward enough: a resounding 78% of respondents aver to being “dissatisfied” with the club’s ownership over the past twelve months – there having been no “on my knees pounding the earth with my puny fists” box to tick – while a similar number (77%) ventured a lack of confidence that the club have “a clear strategy to return to the top”. Tellingly, 51% insist they are “satisfied” with the level of investment in the team, suggesting the street doesn’t buy the notion that it’s simply the case of the wrong manager or players.

It’s when the pollsters get to the European question that the chasm between owners and fans becomes truly apparent, with a near-unanimous 83% of those asked opposed to a future in the Super League and 56% afraid that the idea will be revived with a free set of Pyrex dishes. High numbers weighed-in even against the various UEFA proposals to zhuzh-up the Champions’ League group stages.

Debates over Ralf Rangnick’s suitability as interim boss, or if a ‘strong playing identity’ should be a requirement of the incoming manager, or whether Richard Arnold’s promised rebuild will be any different to any of the last few Old Trafford rebuilds…these are one thing . What the poll spells out is the extent to which board and fans harbor different aspirations for the club entirely.

It’s at an October 2017 meeting at the Locanda Verde restaurant in Tribeca, New York, where we can place a small coterie of plotting proprietors from English football’s elite – Joel and Avram Glazer, Ed Woodward, Liverpoool owner John W Henry and Arsenal’s then-owner Ivan Gazidis – sitting down over linguini and blue crab to wargame the grab for a greater share of the Premiership’s £3.5bn TV rights: the move which ultimately gave way to their aborted European breakaway attempt.

As Wall Street Journal staffers Jonathan Clegg and Joshua Roberts laid out in their 2019 book, The Club, the other major player – Manchester City – have a business model so titanic they only make sense as a going concern if you view them as the first post -Premiership football club in-waiting. Global brand-merchants United, meanwhile, were until recently known to be among the pushiest actors pressing for the Euro plan behind the scenes, with Joel Glazer having been set to serve as his vice-chairman. 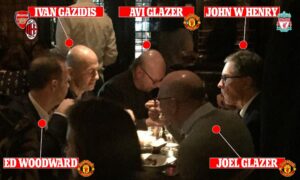 There are billions of pounds at stake here, so you have to ask yourself: what will give?

With market forces impelled towards globalism and fans yearning for the homelier fare of the domestic game you can stare at the conundrum ’til you’re cross-eyed before starting to wonder if the clubs might one day conclude that what’s holding them back…what both might feel they need to begin slowly to edge away from…is the word ‘Manchester’. But that day belongs in a future too frightening to mentally unpack.

The only other potential circuit-breaker is legislative intervention – which is where Tracey Crouch’s fan-led review into football governance hoves into view. The reception accorded to the forty-seven recommendations presented by the former Sports Minister late last year was notably favourable: ‘golden shares’ to be given to supporters allowing them to veto stadium moves and club badge changes; ‘shadow boards’ allowing them greater input on ticket and replica kit prices; new financial checks and fit-and-proper-person tests; parachute payment increases to increase equity between the divisions.

Would the Johnson administration really throw its weight behind such Bovril Socialism?

Most significantly, the report proposes that the government appoint an Independent Regulator for English Football.

That, theoretically, above all other measures, would have the potential to impose real discipline and bring the game’s rampant commercialism to heel.

The Premier League clubs are said to be divided. And with the eyes of all Europe on the Queen’s Speech this coming May – and the question of whether the Tories really will be inclined to pass their proposals into law – reports say Juventus, Real Madrid and Barcelona are threatening to force the issue, putting the Premier League clubs under enormous pressure by threatening to press ahead without them.

“Our national game stands at a crossroads,” says the report, “with the proposed European Super League just one of many illustrations of deep-seated problems. Fans have lost faith.”

So house-of-mirrors has our world become that we can’t know what is leak and what is spin. But things have come to quite a pass if reports out of Old Trafford prove true that the Glazers are considering putting their weight behind Crouch’s recommendations.

One can only shudder at the thought of what their advisers tell them if they’re ever wise enough to conduct their own private polling.