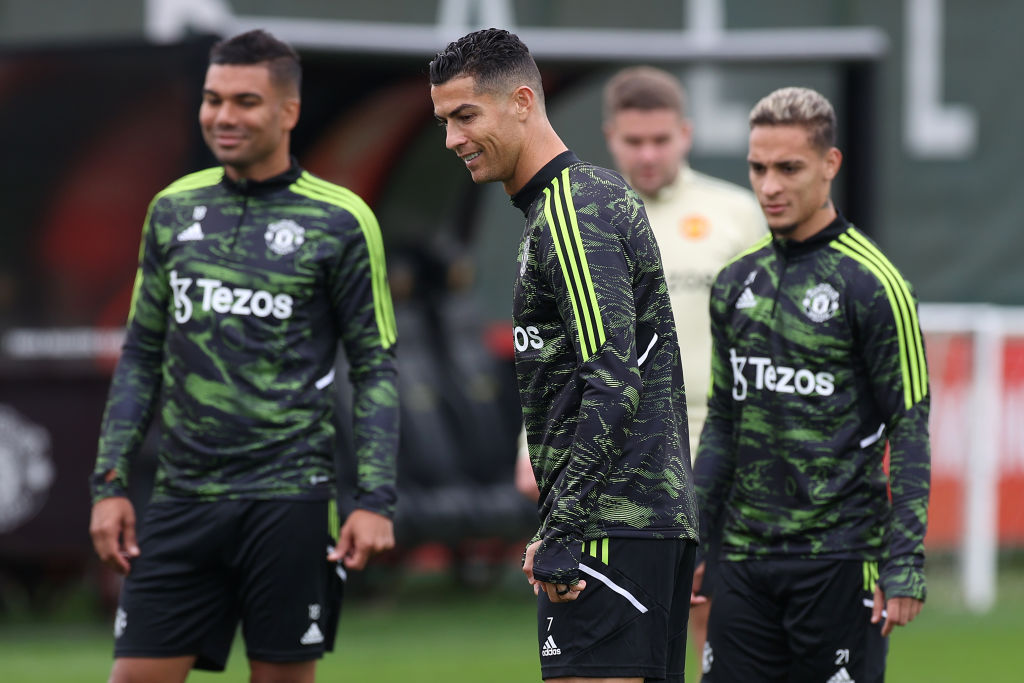 Cristiano Ronaldo was all smiles in Manchester United training and the Portuguese captain got the better of Casemiro in a passing drill.

With Marcus Rashford and Anthony Martial not part of the traveling party that flew to Eastern Europe, Ronaldo is likely to start back-to-back games for the first time under the former Ajax boss.

Cristiano Ronaldo gets the better of Casemiro in Manchester United training

The 37-year-old’s start against Sociedad was his first since the 4-0 defeat to Brentford back in August.

The five-time Ballon d’Or winner had been on the bench for the last four Premier League games which have brought four straight wins.

The former Juventus striker is yet to score this season and the match in Moldova will represent Ronaldo’s last chance to get off the mark at club level prior to the international break.

United’s number seven looked in good spirits in the final training session at Carrington, which took place this morning before the group flew out to Moldova.

Showing off his array of skills and neat footwork despite being in the latter years of his glittering career, Casemiro didn’t know what Ronaldo was going to do with the ball next.

Ronaldo was loving that the Brazilian was falling for his dummies and fakes, but United’s number 18 eventually won the ball back after an undercut pass from Raphael Varane and he shared a chuckle with Ronaldo, and the likes of Antony and Diogo Dalot who were also in the rondo group.