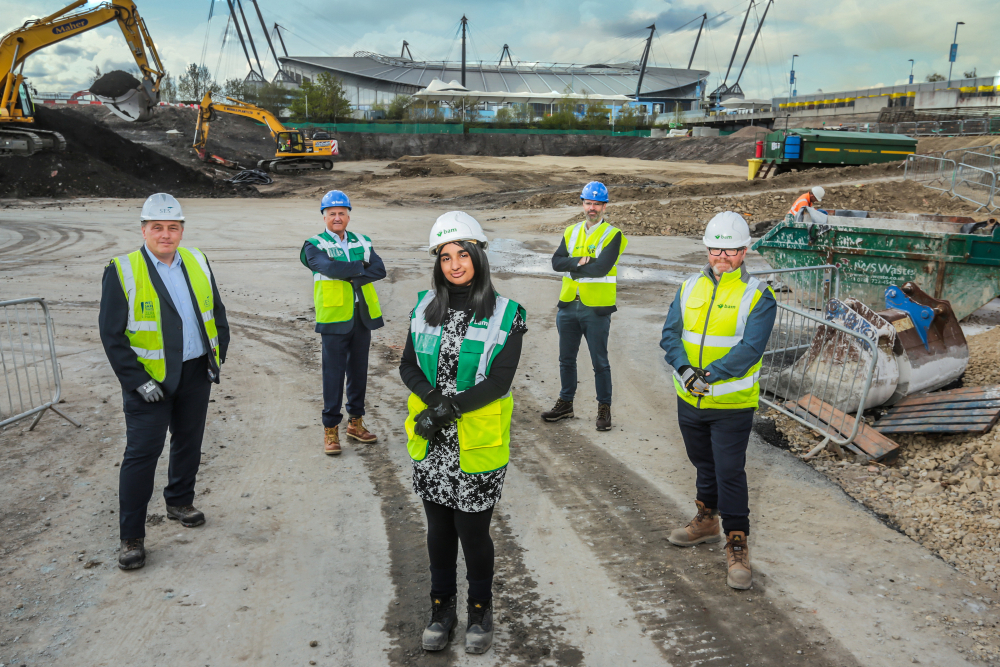 After extensive preparatory work since the beginning of the year, construction of the UK’s largest entertainment arena in Manchester began this week, sparking a wave of economic activity and job creation in Greater Manchester. Co-op Live is being built by Salford-based BAM Construction, which has announced that local firms have already received nearly £ 150m of construction contracts.

Developer OVG is investing over £ 350 million to create one of the best and most sustainable live entertainment arenas in Europe. The construction project is one of the largest to have begun nationally since Covid began and will give the local construction industry a much-needed boost at a critical time in the post-pandemic economic recovery.

At the height of the Co-op Live construction site, around 400 people will be working on it every day. BAM estimates that more than 2,000 people will work on the site during the three-year construction phase, making up the majority of the 3,350 total jobs that the project will support until 2023.

OVG has forecast that Co-op Live will create a further 1,000 jobs during ongoing operations.

The team behind Co-op Live is committed to local sourcing and a number of companies in Greater Manchester and the further northwest are used to create the venue. A dozen companies from the region are already involved in the project.

9,000 tonnes of steel mill is being supplied from a depot in Bolton while a major mechanical and electrical contract has been placed with a company on Altrincham Road in Manchester, SES. The distinctive facade and roof are supplied by a company in Cheadle.

Other services provided by local businesses include concrete, grouting and elevators, as well as smaller contracts for hoarding, welfare, food and security.

Tim Leiweke, Chief Executive OVG, said: “Starting the construction of Co-op Live is an exciting step in our plans to deliver Manchester one of the best and most sustainable arenas in Europe.

“Co-op Live is a Manchester arena for Manchester and Manchester. Since we unveiled our plans last year, we’ve continued to strive to maximize benefits for the city and the entire Northwest. Today’s £ 150m milestone in local business contracts is a proud moment for the project and will help support local jobs and ensure the positive impact of our investment is already being felt. “

Robert Doherty, Operations Director for Strategic Projects for SES (Engineering Services), who is providing all of the mechanical and electrical work for the project, said:

“As a local contractor, our team lives and works mostly in and around Manchester and this project is very popular. Everyone got excited here and it’s great for us to be part of it. We work with our own supply chain to ensure packages are delivered by companies in the Manchester area. We will have over 100 employees working on this project and creating opportunities for local people to get involved. “

Work has begun and millions of pounds of bulk excavation and remediation are underway that will put the area’s freight forwarders and equipment companies to work.

Ian Fleming, the director of BAM Construction in the North West, said:

“The highly digital way of working enables us to achieve the sustainability demanded by the world’s most ambitious customers, and it attracts young professionals like Arooj Ali. Working smarter means working more safely for the 2,000 people crossing our borders and using technologies and techniques such as off-site manufacturing.

“We rely on the quality of our supply chain here in the northwest and how well we work with them to integrate all of these elements. Greater Manchester has the talent and resources we need and this means that BAM’s work here for this northern landmark will boost the local economy and bring great social benefits to the people who live here, which is a source for me of great pride. “

“I’m looking forward to working with BAM on this incredible project and getting other young people excited about entering the industry. I would particularly like to encourage ethnic minorities to join, even if they have not yet considered it. Construction is constantly evolving and we are always faced with new, exciting challenges where no two days are the same.

“There’s a lot of talk about the new arena in the Preston area, and hearing about a project I helped create was a great way to continue my career in the construction industry. We’re all excited about the return of live music and events. So it will be a really rewarding experience to hopefully visit this in a new, state-of-the-art venue! “