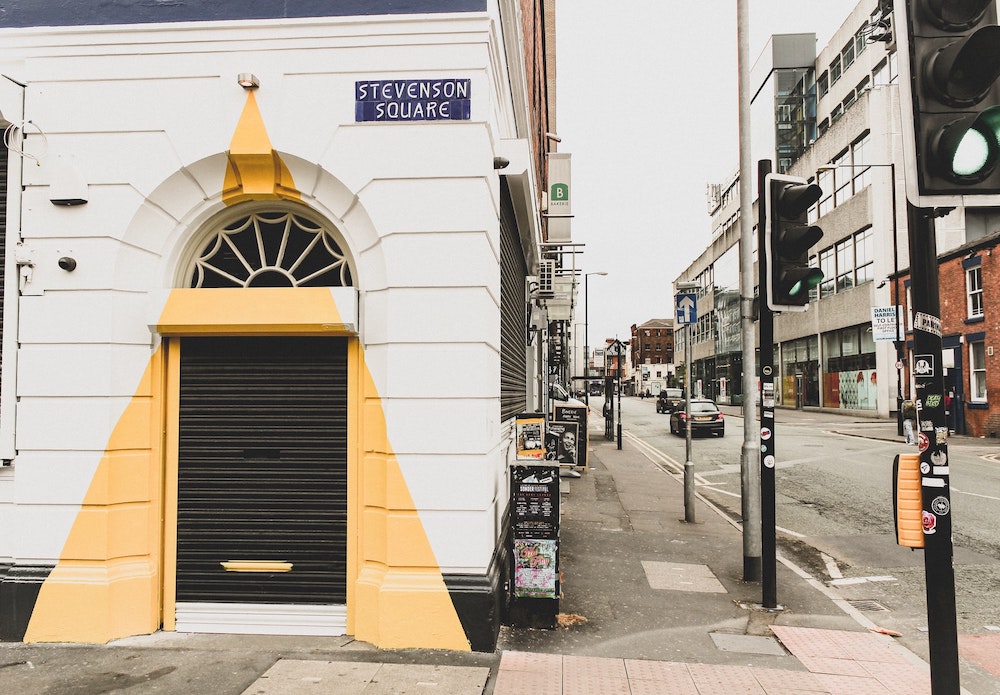 Manchester is a fascinating European city that has all the places, landscapes and locations a street photographer could want. The neighborhoods are pleasantly different, each offering a unique feel, interesting residents, a diverse culinary culture, and beautiful buildings that you can use either as backgrounds or as the main theme of your urban landscapes.

The post below will introduce you to a list of Manchester photo locations that has enough material to capture thousands of fascinating pictures.

If you’re into colorful street art and diverse architecture, grab your favorite street photography camera and head straight to the Northern Quarter. You will be greeted by red brick houses with a New York flair that are often featured in movies and are a great spot for a photoshoot on the street in Manchester.

As you travel down the back streets, you’ll also discover murals painted by world-famous street artists at the Cities of Hope Festival. Each mural serves to highlight a specific global problem.

This place has many bars and pubs that are mostly ignored by tourists and are the perfect background choice for street photos, especially later in the day.

When navigating the Northern Quarter, be sure to visit Tib and Oldham Streets, while also stopping by the junction of High Street and Thomas Streets. Since this part of Manchester is very popular with street photographers, you can often attend a photography workshop.

Chinatown, which is home to one of the largest Chinese quarters in the country, is tucked away in the city center. The first photo spot in Manchester that you want to see here is the archway on Faulkner Street, which was presented by the Chinese community in the late 1980s.

The crowd is made up of a unique mix of English and Chinese locals as well as tourists who help create an authentic conglomerate of people. Since China Town is in the center of the city, you can get there by going to Piccadilly Gardens or the Metrolink stations in St. Peter’s Square.

There are two train stations in Manchester: Piccadilly and Victoria. The latter is the smaller place, which means it sees fewer visitors and offers more opportunities for street photographers. It has an impressive glass roof that you can face with an active crowd or other subjects that you find interesting.

This station is located in the north part of downtown Manchester, near the cathedral, the Irwell River and the Salford border. You can also get here by subway. Remember to use Visme social media graphic templates to ensure your street photos look as eye-catching as possible on social media. 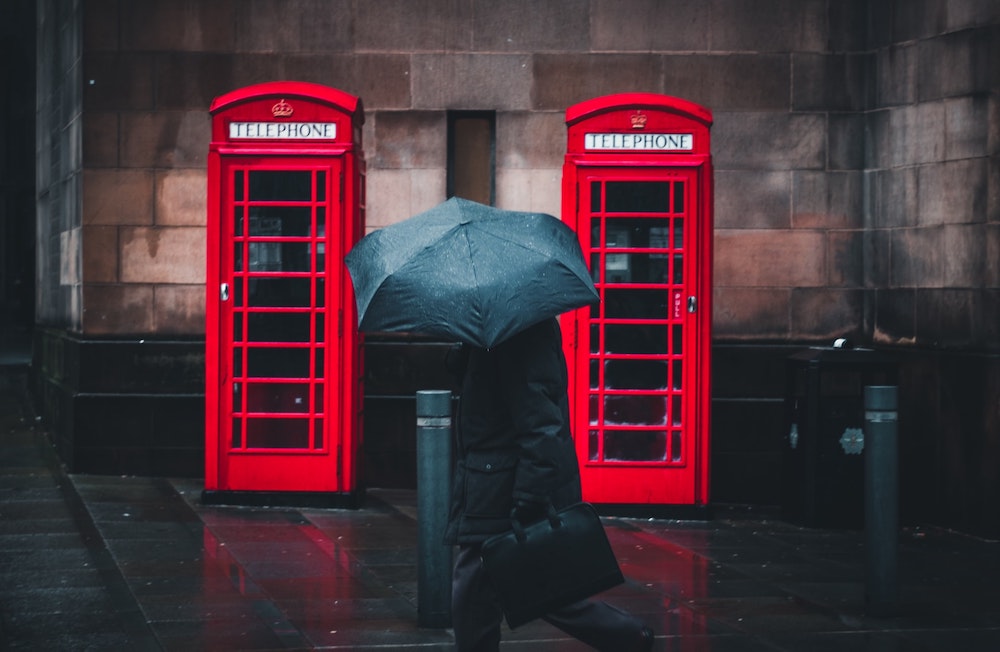 St. Peter’s Square is the most photographed place in Manchester. These phone booths in particular are located near the Manchester Central Library.

Here you will be spoiled for choice when it comes to architectural backdrops, as the town hall, cenotaph and the Emily Pankhurst statue are located in the square. The square also has a tram stop that can serve as a nice backdrop for your street photography.

If you’re no stranger to the ’80s indie rock scene, you’ll instantly recognize the Salford Lads Club that was on the LP sleeve of The Smiths’ Queen is Dead album. Although it was released in 1986, it is still considered a Manchester landmark and a sort of Mecca for Smiths fans.

The club has been open since 1903 and offers a wide list of activities for younger people. If you look around the outside of the club, you’ll see a red-brick Victorian structure that is likely to be surrounded by tourists and colorful British people.

Castlefield was once home to a Roman-era fort and a terminus for the world’s first industrial canal. If you’re into restaurants, pubs and cultural events, Castlefield is now the place to be for photos in Manchester. This place is particularly busy in summer.

Castlefield has a wide range of industrial backdrops for you to experiment with. Whether it’s a series of metal bridges, grubby masonry or a canal connection, there is no shortage of interesting subjects in street photography. There you will also find some remains of a castle as well as a legendary red iron staircase. As an Urban Heritage Park, this area is completely free of traffic, which makes your work as a photographer much easier.

On a sunny day, Spinningfields is probably the nicest place Manchester has to offer. Not only is this downtown area home to some of the city’s largest businesses, it is also a cultural, shopping, and dining destination for both locals and tourists.

There is no better place to capture the bustling everyday life of the Mancunians while showing the city’s fascinating, modern buildings in the background.

Spinningfields allows street photographers to see the city’s latest architectural advances alongside classic buildings like John Ryland’s Library, helping everyone find a setting they like.

This street of Manchester photo location is full of breathtaking structures and a huge urban landscape alongside a large body of water. Subjects photographers can work with include wharfs, bridges, and various architectural elements.

If you’re looking for a nature-themed photo spot in Manchester you’ve come to the right place. This extensive green space, half botanical garden and half nature reserve was founded in 1917 and is a stark contrast to the chaos in the city center.

Both the park and gardens provide walking trails for visitors and impress them with wildlife, flora and landscapes that range from small waterfalls and ponds to all kinds of trees and bushes.

Activities at Fletcher Moss Park include picnics, tennis, rugby, and soccer to ensure street photographers never run out of subjects to capture. Access to this place is completely free.

This place has long been a must see for football fans as it is home to one of the most famous clubs in the world – Manchester United. You can find a statue of 3 legendary players on the opposite side of the North Stand Megastore, which is the perfect selfie backdrop for any man. United supporters. About a million fans came to England to witness a football match last year, and Old Trafford is the most popular spot among them.

Regardless of the time of year, you will always see a ton of sports tourists near the stadium, so you have more than enough chances to snap photos of emotional faces and real excitement.

Afflecks has the typical red brick style of most of the houses built in the Victorian era. Although the structure was constructed in the 1860s, the most impressive part is the selection of mosaics created by Mark Kennedy and added to the facade in 2011.

The mosaics highlight the city’s sports and cultural achievements, including Coronation Street and the suffragettes. Inside, you will be greeted by an alternative shopping location. So if you need a steady stream of people for your Manchester Street photoshoot, it’s easy to find here.

12. The University of Manchester 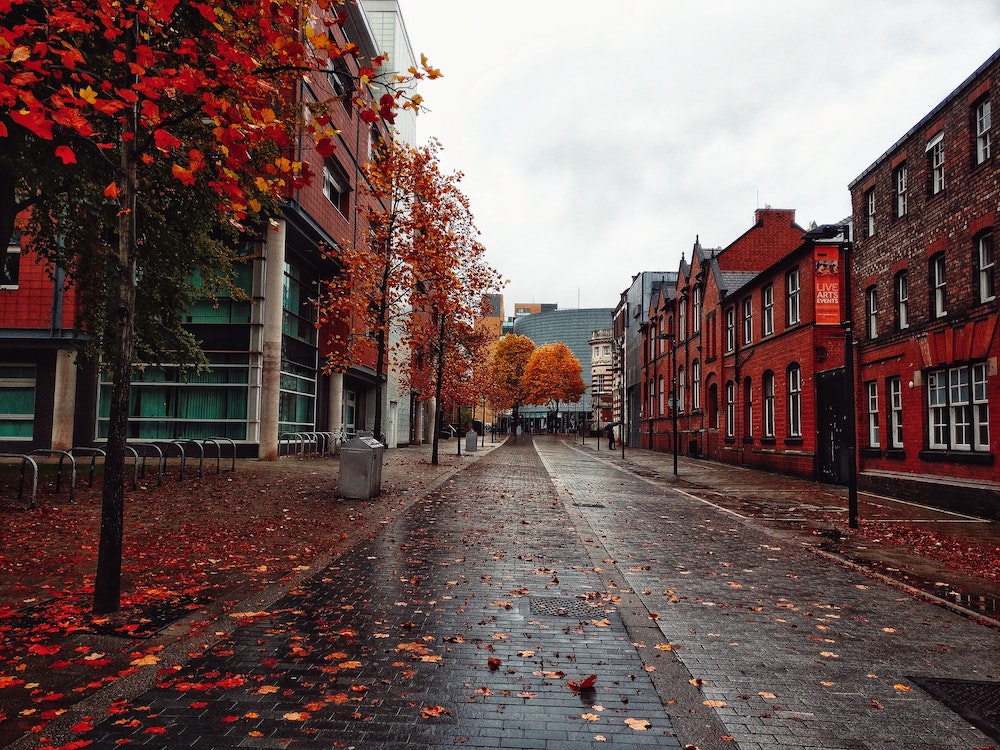 Not only is the University of Manchester a world class educational institution in the UK, it is also a series of stunning buildings that can serve as the backdrop for your street scenes.

It’s a great place to capture students on campus in between their studies or tourists who often come here to take Instagram photos.

The building, built in 1552, is the oldest of its kind in Manchester and represents the best pub in town when it comes to street photography as it is always surrounded by a crowd of happy visitors.

The building attracts photographers and tourists with its Tudor-style facade. Meanwhile, the large terrace at the front of the pub is a fantastic place to take photos and share a drink or two with your friends.